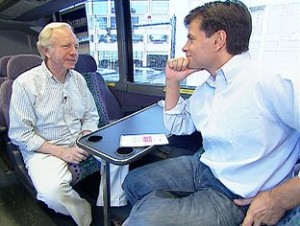 There are no shortage of pundits and political commentators who have weighed in on the forces behind Senator Joe’s primary loss to the deep-pocketed and blue blooded Ned Lamont.

The bloggers, of course, attribute the upset to their brethren’s growing political influence. Others blame the incumbent for his lateness (arrogance?) in acknowledging the threat at hand. Some lefties would have voted for anyone who didn’t get bussed by Bush.

Personally, I have my own thoughts. Over the weekend, I managed to catch both Sen. Lieberman and Mr. Lamont on ABC’s This Week George Stephanopolous. The Senator lacked energy, and frankly was cumbersome. Lamont, in contrast, was quick and appeared much more alert. Net net: Lamont looked and sounded much, much better.

In fact, it didn’t even matter what he said. It was how he said it. If I were a Connecticut Yankee, I would have voted the 800 Ned number at the bottom of the screen based purely on his telegenics

So, Peter, how then do you explain the inarticulate Mr. Bush’s ascension to the top political office in the land? Let’s just say, he had some help.