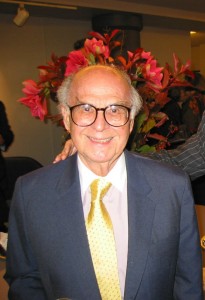 Few people outside of New York will have a chance to read with any regularity the feisty right-of-center New York Sun newspaper. But PR afficionados everywhere will not want to miss PR Week’s “most influential PR person of the century” Harold Burson as profiled on the day before his 85th birthday.

Over lunch at The Four Seasons , the Sun reporter, to his credit, gave the remarkably lucid and always insightful Mr. Burson complete latitude to reflect on his career, the global firm he built, and the striking technological and sociological changes he has witnessed during his lifetime.

Having spent more than a decade in his employ, I can report that the classical music wafting from his 1930’s Cathedral radio, his big Stickley rocking chair, and the promise of his sagacity, rarely failed to beckon as a safe and inspiring haven for me and countless others.

The number of PR pundits in the blogosphere may be rapidly multiplying, but let’s not lose sight of those who codified the fundamentals on which our industry was built…and still very much relies. Happy birthday, Harold.