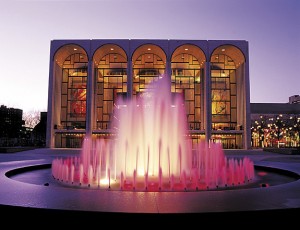 My wife and I took a private tour of the theaters at New York’s Lincoln Center yesterday. Who knew that Rockefeller purchased all that land for just $5 million in 1956?

Today, this magnificent complex plays host to the likes of the New York Philharmonic, Metropolitan Opera, Vivian Beaumont Theatre and a half-dozen other esteemed cultural institutions, including the New York City Ballet where we caught a glimpse of the second act of “The Nutcracker Suite.”

Nearly all are supported by private donations, and of all the funding sources, few exceed that of the second richest New Yorker (behind Mayor Mike). David Koch is the scion of Koch Industries and a major mover & shaker in New York’s social circles. His name is peppered throughout the complex, but most prominently on the facade of the David H. Koch Theatre on the south side of Lincoln Center Plaza opposite the fountain.

Ironically, Mr. Koch (pronounced coke) also happens to play a starring role in elevating the Tea Party and supporting many of the stealth organizations that question the science behind global warming. After all, the profits of his energy company will suffer significantly should stricter environmental regulations come to pass.

“In the announcement, the company, which has is based in Wichita and has interests in everything from oil refining to carpeting to Dixie paper cups, appears to commit itself to cutting off its financing of groups like Americans for Prosperity, the Fraser Institute, the Foundation for Research on Economics and the Environment and the Manhattan Institute for Policy Research, among others.” 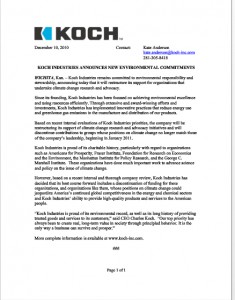 One problem: it was a cleverly orchestrated spoof. Koch Industries had this to say:

â€œThis is not a Koch Industries release,â€ the spokeswoman, Katie Stavinoha, said in an e-mail. â€œWe remain committed to the principled positions we have taken on a wide variety of issues.â€

Talking about principles, wouldn’t you think that Lincoln Center board chair Katherine Farley would consider disassociating this treasured cultural institution’s good name  from a man whose extreme political leanings run counter to all it and its patrons represent and believe?