Several months ago I presided over a Publicity Club of New York panel featuring a handful of reporters and editors from news orgs that could very well represent the future of journalism. They were there to offer the 120+ NYC PR execs in attendanceÂ an overview of their “digitally native” approach to news gathering, contentÂ publishingÂ and sharing across the social spheres. (Link to full audio here.)

Vox, Mic, Re/code and Quartz may not yet enjoy the brand awareness of The New York Times, CNN, or Bloomberg News, but their ability to drive awareness for their reporting is impressive given their much smaller staffs and budgets. Nonetheless, this past weekend Politico’s media reporter Dylan Byers raised a few eyebrows by audaciously questioning all the hype around one such new age outlet – Vox.Â

In his piece “Vox not living up to the hype, explained,” ByersÂ wrote:

“For all the talk about reinventing the wheel, they say, Vox has yet to live up to the lofty expectations that were set by its proprietor. Some argue that, far from a radical reinvention of journalism, it’s closer to a redeployment of the old models: three parts Wonkblog â€” the blog he had at The Post, which explained current events and policy debates through charts and data â€” and one part Wikipedia, with ‘explainers’ on big issues like ISIS and the Ebola outbreak.”

Slate’s Dave Weigel caught wind of the meme and decided to compare Vox’s numbers to Byers’ employer Politico in his retort “Here’s What You Need to Know About Politico’s Coverage of Vox, in Two Charts:” 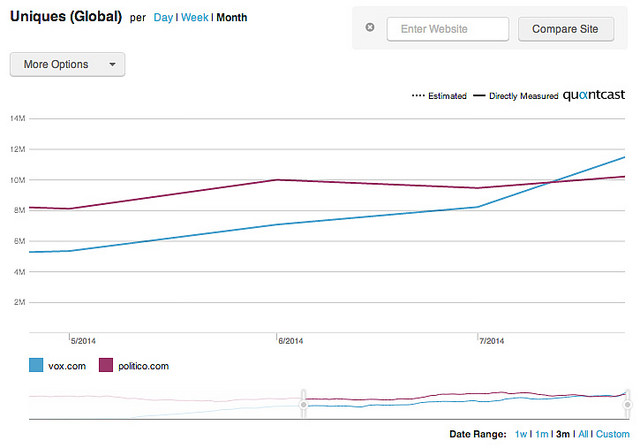 “So: How can we assess Politico’s lead story, and its claim that Vox is not living up to the hype? It’s not suffering for traffic. It has not obviously changed the way older media outlets work, in that other outlets have not copied the Vox â€œcardsâ€ or the other innovations. But Vox, like Slate, is a product of an Internet that reads less by Googling or checking homepages, and more by checking social media.”

Coming back to our PCNY panel, I decided to bring up the subject of influence, and specifically how I missÂ the days when a less-fragmented media enabledÂ a single story in aÂ respectedÂ news organizations like The New York TimesÂ sparkÂ a national dialogue, which in turn might spur regulatory or legislative action, presumably for the greater good. I lamented the fact that consumers now have a myriad choices for their news & information — many with politically motivated orÂ self-serving agendas –Â that has created a media environment whereinÂ vital stories get easily pre-empted by KimyeÂ orÂ the latest YouTube sensation,Â or disappearÂ too quickly in the rear view mirror.

My nostalgic lapse apparently struck a discordant note with the media pundits on the panel — Zach Seward of Quartz and Peter Kafka of Re/code — each of whom looked at me askew as if I had personally maligned their families. Â Of course they believed that the emergenceÂ of thisÂ new media world order with its many disparate voices and social sharing is a vast improvement over the monolithic, newspaper-driven model that pushed its headlines into the public consciousness for the better part of the last century. How could it not be? Frankly, I think they thought I was an idiot. (I’m not.)

Nonetheless, we still see vestiges of how big media can produce action and change for the positive. Just last week The New York Times‘s Jodi Kantor reported on how someÂ companies’ use of software to scheduleÂ their employees’ work hoursÂ has wreakedÂ havocÂ among many, mostly lower income workers. She looked at a number of different scenarios and companies, one of which was the forward-thinking Starbucks.

A by-product of her piece prompted a follow-up story whose title speaks for itself “Times Article Changes a Starbucks Policy, Fast.”Â  In it, Ms. Kantor wrote:

“The article went online late last Wednesday night, and on Thursday morning, I was floored to read an email from a Starbucks spokesman announcing changes to its scheduling practices. And although The New York Times is sold at Starbucks, I had not thought through how much discussion the article would cause in stores, with customers reading the dayâ€™s paper and then asking baristas if they faced the same issues. In our follow-up story, I noted some skepticism about the changes Starbucks announced: Their response was so fast that I worried it was more about public relations than substantive change. But since then Iâ€™ve heard promising signs from the workers Iâ€™ve kept in touch with: conference calls with managers across the country, a new standard of 10 daysâ€™ notice, paid time for managers to create more worker-friendly schedules.”

For what it’s worth, Ms. Kantor, the capacity for a prominent New York Times investigative piece to createÂ action was once the rule notÂ the exception.

I’m not denigrating the valueÂ of this new wave of digital, socially driven journalism. I find their output to be as good as it gets in the realm of quality journalism. I just wonder whether media’s fragmentation has crippled its long-held capacity to effect positive change. I just wonder whether media fragmentation has crippled the industry’s long-held capacity to effect positive change. Has all this competing noise dilutedÂ journalism’s essentialÂ role as the “fourth estate?”