When I first reported on the Apple Watch as it readied for launch, the piece was written as an imagined internal conversation in Cupertino about how best to market the wearable tech fashion accessory. Some of what I penned actually had prescience. Much of it didn’t.

We’re now more than three months into it, and there are hordes (millions?) of Watch owners who’ve extolled the wearable device’s life-changing virtues. Some have dismissed the naysayers by comparing the launch to the lukewarm reception the iPhone received as it ushered in a new category. Did it really?

Truth be told, the Apple Watch is Apple’s most successful product launch to date besting the likes of the iPod and the iPhone.

Even so, I’m beginning to notice some pushback by some rather influential media types who follow such things. It frankly surprised me that Business Insider’s executive editor Jay Yarow trumpeted to his 18.5K Twitter followers that he decided to sell his Apple Watch on Craigs List for $500.

OK. I’ve written why I am trying to sell my Apple Watch. Just waiting for @stevekovach to read it over, then can set live.

“After a month with the watch, the newness of the device has worn off, and I am left with a product that’s not a must-have. It’s very first version. I believe that in a year, or more likely two, this product will be much better. I would rather have $400-plus to put toward other things in life.”

BTW, it did sell (thank you Craig) and Mr. Yarow made “a tiny profit.”

Today, The Times’s Vanessa Friedman ran an even more caustic first-person piece title “Why I’m Breaking Up With the Apple Watch.” It questioned the very utility for which the Watch was built. I thought her piece, and what it may portend, was tweetable:

Other than her distaste for being ostentatious:

“Like, for example, that I do not want to be defined by a talking point on my wrist. There is a reason that I carry the same (no logo) handbag everywhere I go, a reason my (pre-Apple) watch had no bells or tourbillon whistles; a reason I gravitate toward clothes that are not identifiable by season or designer and do not appear in any advertisements I have ever seen.”

Ms. Friedman simply concluded the Apple Watch’s functionality did not align with her everyday needs. Take the screen size:

“…the small screen is simply too small to really read on, so I’ve been more annoyed than happy when it alerted me to texts from my loved ones; and when I saw a headline, all I wanted to do was find the rest of the story.” 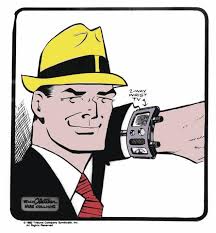 Or her issues with how people will react if she’s pulling a Dick Tracy by talking into thin air:

“Just as my default position when trying to read an email or the text of a headline on the small screen involves raising my wrist to near eye level — or, if a phone call is involved and my actual phone is not reachable, talking into thin air. If your children or acquaintances come upon you, it’s pretty much an invitation to ridicule.”

Now I’m not saying there are cracks in Apple’s vaunted marketing juggernaut, but the Yarow and Friedman assessments must be giving Apple’s PR department agita.

Can the Watch transcend the Apple Fan Boy community and early adopter status seekers to achieve mass market embrace? Does the company even aspire to this, given the item’s relatively high price point and luxury category positioning?

While not a meme yet, these two pieces could easily serve as catalysts to make it so. I for one am keeping my eye on it. I also plan to make my own evaluation once my #3 son’s 42mm version arrives…on back order.