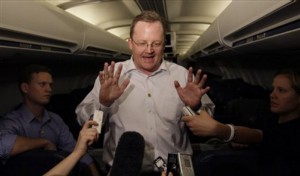 Few will argue with the innovative communications strategy the Obama campaign’s PR consiglieres deployed to catapult him into the presidency. That success bred unanimous accolades, while his opponent’s PR shortcomings spurred general derision — at least from the usual punditry.

One industry colleague recently quipped to me that it wasn’t social media and its ability to directly engage the electorate that drove Senator Obama’s campaign success. Rather, it was the Senator himself and his riveting message of hope…following seven years of Bush Administration purposeful disengagement from the American people.

Could the charismatic and articulate Senator from Illinois have won the election using traditional communications tactics? We will never know for sure, but we can glean some added insights in reading this New York Times magazine piece on which @GioRodriguez tweeted this morning.

In the profile of Obama spokesman Robert Gibbs, we are offered a glimpse into what worked in the campaign, and how the WH incoming communications team will diverge, and surprisingly, borrow from the Bush PR doctrine.

What follows are select passages, the first of which confirm’s the campaign’s disdain for the traditional media filter:

“The paradox of this scene was that the Obama campaignâ€™s communications strategy was predicated in part on an aggressive indifference to this insider set. The campaign bragged that Obama never even visited with the editorial board of The Washington Post…”

And then we have the continued need and prevalence of message command-and-control:

“Obamaâ€™s operatives spoke with a single voice and a precise message and only when they wanted to. They did it with a smile, not complaining â€” at least not publicly â€” about how the press was the enemy. And they did it using interactive tools that bred a feeling of real-time connectedness between campaign and voter.

…many reporters and rivals have noted the â€œBush-likeâ€ tendencies the Obama campaign demonstrated in its ability to control information. The comparison is generally meant as a compliment (albeit a grudging one) by members of the press and expressed enviously by veterans of other campaigns.

Plouffe himself admitted to me that the Obama campaign subscribed to the â€œBush modelâ€ of communications discipline. Asked if Obama himself spoke of the â€œBush model,â€ Plouffe told me he did.”

Of course, by-passing the media filter to directly engage the electorate was a hallmark of the campaign, and may also be for an Obama Administration:

“The campaign highlighted its mastery of new political media that included a vast database of e-mail addresses and an ability to quickly put up Web sites and use blogs, online video and text messaging.

“In the course of the campaign, the Obama team showcased a number of new-media applications designed to project a sense of open-book communications to the public. They promoted the fact that the campaign made major announcements â€” like Obamaâ€™s selection of Biden â€” by communicating â€œdirectlyâ€ with voters who provided their e-mail and text addresses.

If Obama was attacked by a rival, the campaign would not just push back by traditional means (arguing their case with reporters) but also by putting up their own Web sites like fightthesmears.com. This allowed the campaign not only to defend itself but also to draw more coverage to how innovative and responsive it was.

Mr. Gibbs acknowledges the need to cultivate traditional journalists. His boss explains what Gibbs adds to the communications equation:

“When he speaks of press relations, Gibbs tends to do so in metaphor. ‘Do you build a moat between the two, or do you build a drawbridge?’ Gibbs said, the ‘two’ being the press and presidency. He said he advocates the drawbridge approach.

Obama praises Gibbsâ€™s intuitive sense of ‘what is on the minds of the American people,’ and his ear for ‘how things play’ in the media.”

Now Bush spokesperson Scott McClellan could hide behind the fact that he was out of the loop. What about Mr. Gibbs?

“‘…having a White House press secretary who is also a confidante can be radioactive.’ Having an ‘open-door chain of command’ between their two offices, the former adviser said, can lead to a spokesman feeling pressure to lie to protect the president.”

As for the incoming communications hierarchy:

“In the Obama communications operation, Axelrod will continue to oversee the media and message strategy. Emanuel will clearly have a pivotal role. And Pfeiffer, the deputy director of communications, and Ellen Moran, the new White House communications director, will try to offset Gibbsâ€™s well-known allergy to things management-related. Gibbs is prone to being disorganized.”

So, can message command-and-control live side-by-side with the promise of transparency?

“In spite of their closed-ranks tendencies, the Obama communications teamâ€™s buzzwords of choice are ‘transparency’ and ‘openness.’ When you press Obama aides on how they would define â€œtransparencyâ€ and â€œopenness,â€ they often invoke their willingness to make documents public during the campaign. As with the Bush model, Obamaâ€™s view of transparency and openness did not include exposing internal discussions.”

So the million dollar question: how will the incoming administration utilize the 3-million+ names it has gathered in its database?

“There has been much speculation about how the new administration might deploy the Obama campaignâ€™s massive voter database. People have theorized that it could be a way for the White House to skirt the traditional media ‘filter’…

‘…The massive list of energized activists is the biggest stick Obama will carry in Washington,’ the liberal blogger Ari Melber wrote on The Nationâ€™s Web site. ‘It enables direct communication at a remarkable scale. . . . To put it another way, the list dwarfs the audience of all the nightly cable-news shows combined.'”

While direct-to-supporter communications may temper the harsh media spotlight, Mr. Gibbs and company cannot rely on that alone if they expect to prevail in the court of public opinion:

“WHAT IS GENERALLY AGREED UPON is that the traditional media will turn harsher at some point.”

No doubt. More links below: