I recently wrote about Tesla’s PR travails (think burning car), and how company founder Elon Musk took it upon himself to directly and earnestly respond to the fallout. This was the second time that Mr. Musk (does anyone call him Mr. Musk?) penned a point-by-point refutation to quell criticism.

What did I gain for my timely attention to Elon Musk?  Here’s what.

This ill-formatted and conceived PR pitch just landed in my Google+ affiliated email inbox from someone named Johnny Testa who I think was aided by a couple of publicists from NYC’s fabled Rubenstein Public Relations firm: 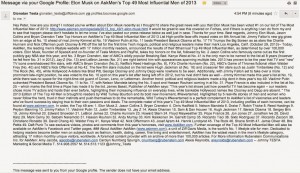 The sender apparently was under the impression that I’m on the “Elon Musk beat” at Forbes, and offered his help to do “anything” to see Forbes publish the “news” that the man behind Tesla/SpaceX/Hyperloop, et. al., sits atop AskMen’s Top 49 Most Influential Men. Why 49? I guess only Buzzfeed would know.  Here’s Johnny:

“Hey Peter, how are you doing? I noticed you’ve written about Elon Musk recently so I thought I’d share the great news with you that Elon Musk has been voted #1 on our list of The Most Influential Men of 2013: http://www.askmen.com/specials/2013_top_49/1-elon-musk.html It would be great to see this covered on Forbes, and if there is anything I can do from my end to see that happen please don’t hesitate to let me know.”

Your wish is granted, but probably not in the manner you envisioned. Also, I wonder if this piece counts toward Rubenstein’s scorecard of media hits?

Finally, who knew that Google allowed marketers & PR types to gain access to my email via Google+?