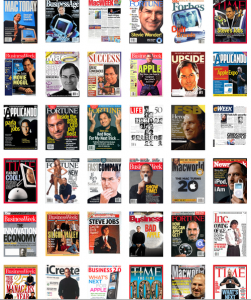 My buddy Howard Bailen directed me to a piece in today’s Globe & Mail that reported on a new study that showed “how the compensation of 1,500 CEOs of companies in the United States rose in the year after getting featured in the media.”

The three key findings from the Univ. of Colorado B-school’s study:

“A single article featuring a CEO in a major business press such as the New York Times, Wall Street Journal, Forbes, Fortune or Business Week raised his or her compensation – including salary and bonuses – by an average of $600,000 (U.S.).”

“Getting on the cover of Forbes, Fortune or BusinessWeek was good for a raise that averaged $1.1-million.”

“The more positive mentions in the business press in a year, the greater the increase in a CEO’s compensation.”

Makes sense to me. (See above images.) Surprisingly, the Leeds School of Business study also found that:

“Negative coverage, however, was almost never followed by a reduction in the pay package. In fact, even if the story was slightly negative, the executive was likely to see an increase in compensation.”