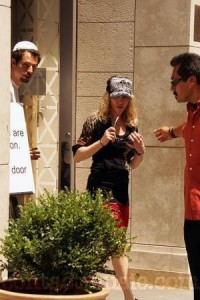 You gotta love Roger Friedman, Fox’s acerbic and most amusing gossipist. I bet he honed his killer instincts at Camp Greylock, the venerable all boys sports camp where I first met him as an 11-year-old. I digress.

Roger astutely asserts in his latest column that the queen of pop, or more specifically, her manager, has manufactured a series of newsmaking scandals to help bolster CD, movie and concert receipts. The first scandal has Madonna allegedly in a romantic romp with the Yankees’ star third baseman (with whom she happens to share a manager).

The second has Ms. Ciccone hooking up with her old flame Sandra Bernhard after the two attended Kaballah services together. Is this even kosher? And finally, Rog says the whole Guy Ritchie divorce thing is a sham. Roger postulates that it’s all manufactured to garner publicity:

“In other words: We are being subjected to a summer long P.R. campaign surrounding this couple just to build interest in them. Enough already! Oh yeah, is it working? Well, now you know about the film and the tour. I guess it is. Brilliantly.”

Hey Roger, you forgot one: the titillating tell-all tome penned by Madonna’s estranged brother Christopher. Doesn’t its arrival coincide with her concert tour, and therefore couldn’t it be construed as a cheap shot at sibling reconciliation? If Roger’s right, and who am I to doubt a columnist for Fox News, then he’s proved the adage that all publicity is good publicity.