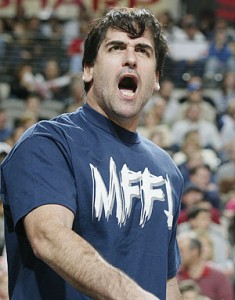 So by now, you’ve read the unfortunate news that the SEC has charged Mark Cuban with insider trading. The original maverick who made a gazillion dollars by selling Broadcast.com to Yahoo! and taking the money to buy the Dallas Mavs, today comfortably resides at the intersection of media, technology and sports.

This blogger has admirably followed Mr. Cuban’s punditry these last few years. He’s one of the more astute and outspoken observers of how the digital revolution impacts our lives.

Yet, with this latest news crashing all around him, he has said nothing, zilch on his blog about it as of 1pm EST today. There are many learning of this story who will have a hard time reconciling this maverick’s over-sized personality with his weblog’s conspicuous void.

I mean this is a guy who’s not shy about speaking his mind 0n any subject – no matter how testy or un-PC.

Freshly minted “social media experts” will offer the usual advice urging Mr. Cuban to confront this adversity by posting his position publicly on his personal pulpit. One picayune problem: Mr. Cuban’s lawyers. They’ve clearly shared their sagacity: the sanctity of the sound of silence.

It’s one thing to post your thoughts after being maligned in the media, but quite another to do so when what you say “can and will be used against you in a court of law.”

Personally, I don’t expect Mr. Cuban to remain silent for long. I just wonder what form it will take and how much temperance we’ll see. Stay tuned.

Update (2:28pm EST): About an hour after I posted this item, Mr. Cuban turned over his blog to his lawyer in a post titled “The SEC” in which Mr. Cuban inimitably stated:

â€œI am disappointed that the Commission chose to bring this case based upon its Enforcement staffâ€™s win-at-any-cost ambitions. The staffâ€™s process was result-oriented, facts be damned. The governmentâ€™s claims are false and they will be proven to be so.â€

“I wish I could say more, but I will have to leave it to this, and let the judicial process do its job.”