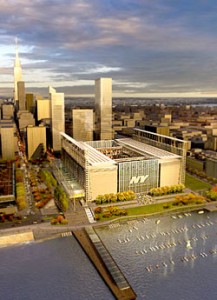 What I don’t understand is why Deputy NYC Mayor Dan Doctoroff, who is speaheading the city’s 2012 Olympic bid, has put all his eggs in the west side stadium basket. If the stadium fails to manifest in Manhattan, is there not a fall back position upon which the IOC might look favorably in considering New York?

I recognize that all PR efforts are focused on winning approval for the construction of that stadium, but it seems short-sighted to not let the IOC know that the Games are viable in New York City without it. (Maybe they’re not?) Mr. Doctoroff is smart to maintain a buoyant posture over the IOC’s report that NYC is in the running, even though it seems that London and Paris do have the edge in advance of next month’s decision.