OK So I arrived late. Who knew that O’Reilly Media/UBM TechWeb’s Web 2.0 Expo had moved from that behemoth complex along the Hudson River to the heart of Manhattan’s tourist district? (I guess I should have.)

I thus missed the first of the four sessions I hoped to attend.  It featured Karin Klein, Bloomberg LP’s head of biz dev. Oh well. It wasn’t really of primary interest to the PR-minded readers of this blog anyway.

The next three sessions, however, were spot on. The first featured Dorie Clark, one of several comms pros who parlayed the pathbreaking digital work on the Howard Dean Presidential campaign into a successful Boston-based communications consultancy. (Others I know from that campaign include Nicco Mele, Joe Trippi and Teddy Goff who toiled at the agency that was spawned from that work for Dean.)

Dorie’s session was titled “How to (Mostly) Control Your Online Reputation.” She opened with a slide with some practical advice, and then proceeded to run through a litany of examples that were familiar to anyone following such things. 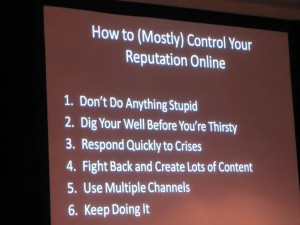 I especially related to #2, which I tend to call banking one’s “reputation capital” for a rainy day. One case in point was Taco Bell whose “well” of Twitter and Facebook friends and followers helped shield the QSR from potentially reputation-ruining ruminations of selling “mystery meat”.

Next up was Joshua Michele-Ross alongside whom I sat on a panel several years earlier.  Joshua heads digital in Europe out of Amsterdam for Omnicom’s Fleishman Hillard.  His talk was titled “What’s Your Social Media Architecture.“

He cleverly used the metaphor of the “mystery house” that  heiress Sarah Winchester built following her husband’s death wherein stairways led to dead ends, doors opened to nowhere…  Josh cited a recent study that showed how large companies today owned an average of 178 (disconnected and many languishing) social channels.

He went on to list five attributes a company must strive to meet for its social media architecture to succeed,  I had a chance to grab some sound with Josh following his session. Here’s the link. RT: 6 minutes). Here’s the audio of his full presentation. (RT: 38 minutes)

Next up was the always insightful and affable Peter Kim, chief strategy officer for the Dachis Group out of Austin.  Peter’s talk was titled “Social Media Mythbusters” for which he honed in on three myths:

I was especially enamored with the third “myth,” since for years now, social media pundits have decried the notion that organizations need to be in these channels simply because its de rigeur to do so. 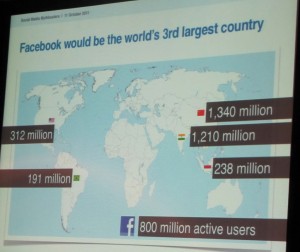 I did grab sound sound with Peter following his session. Here’s the clip. (RT: 6:02). And here the audio from the full session. (RT: 33 mins, volume boost needed)

All in all, Web 2.0 Expo New York provided a most worthwhile visit for this blogger.  But I’ve come to expect nothing less from the team at O’Reilly Media.