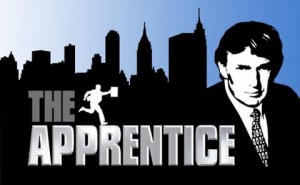 As if The Donald needs another publicist, file this one under slow news day:

Media Bistro’s FishBowl New York received an e-mailed pitch note with the “requisite” news release pasted therein. The Phoenix PR firm that sent it breathlessly touted the selection of one of its own as the first in the PR profession to appear on the silly show. A “requisite” interview was offered. Fish Bowl NY, for its part, reprinted verbatim the pitch note and news release.

Unfortunately, the story is not exactly true. The firm, Orca Communications, apparently didn’t do its homework before releasing this whale of a story to exploit, for its own publicity, this ignoble calling for one of its employees.

The fall 2005 season of Martha Stewart’s “The Apprentice” did have a PR pro as one of its 16 contestants. She is Dawn Silvia, “a 33-year-old PR consultant from Boston, MA. who heads up Red Wagon Communications, a marketing and PR agency.” So much for superlatives.