Having just endured a Mother Nature-inspired nightmare vacation travel scenario co-starring United Airlines and US Airways, I find myself especially attuned to the foibles of airline travel today.

The big carriers, in spite of some clever viral spots from Jet Blue, still don’t seem to appreciate their customers.

Sure, who knew the NY metro area would be paralyzed by a freak snowstorm on one of the busiest travel days of the year?

To make matters worse, stranded United Airlines travelers had to strain to communicate with Philippine-based UA booking agents, most of whom had no idea it had even snowed in New York. (It wasn’t until I met 18-year UA veteran agent Kristee Barker at United’s customer service center in the Denver terminal that my faith was partially restored.)

After that whole experience, plus the $23 per-checked-bag, premium prices for extra legroom, credit card purchases for anything solid to eat, and the many other schemes carriers use to exploit their captive customers gives me pause in an era when customers supposedly rule.

I therefore had some satisfaction when I received this email today from another of the major airlines that has adopted a “customer last” approach en route to “profitability:” 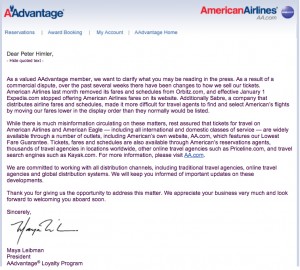 Now this is a real sticky wicket for AA. Having played a role at the outset of third-party online booking sites through my PR work to launch Orbitz, I would say that American doesn’t help itself by banning Orbitz from making bookings. To compound matters, as of January 1, Expedia dropped AA while the airline’s presence on the behemoth Sabre booking system, used by most travel agents, is under threat. A veritable perfect storm, if you will.

I do give the airline some credit for this email to its AAdvantage card holders, but this is just the tip of the iceberg, so to speak, in order for AA to get back on course. (Think Cablevision’s recent capitulation to News Corp.) I’m keeping a watchful eye on how American chooses to navigate these most turbulent skies.