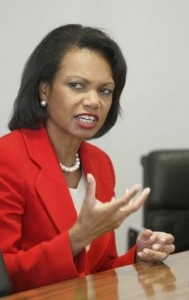 Outcome: Unfolding on your desktop, Blackberry and at your local mainstream media outlet as we speak.

Isn’t it nice to have such sympatico news organizations at one’s disposal in the media capital of the world? Well, at least Ms. Rice paid a separate visit to the newspaper of record…albeit with a different message track.