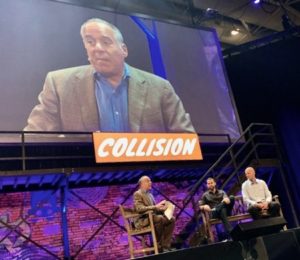 At the recent Collision Conference, I had the pleasure of taking the stage alongside The Trade Desk‘s co-founder/CTO Dave Pickles and AdRoll Group president Scott Gifis. We talked about the fast-changing and increasingly complex world of data-driven advertising in the age of programmatic and connected television.

We opened the session by gauging whether the audience of 1000+ had heard of these acronyms: DSP, OTT, and SVOD. Only a small minority had.

Pickles has been in the industry for more than 10 years and is surprised at the rapid uptake of connected television, while Gifis focused on cross-channel marketing and measuring results, among much more.