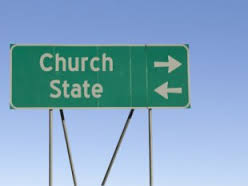 When the media cognoscenti think about church & state, their focus typically revolves around the wall separating editorial decision-making and advertising sales. Journalistic purists at nearly every established news organization resist any influence an advertiser may try to exert over the news/feature hole.

In fact, the church-state model is more than a metaphor at many media orgs. It’s physical, with these two distinct operations literally walled off or residing on separate floors. In recent years, however, the precipitous decline and diffusion of (mostly) print and online ad revenue has spawned new rev-gen schemes that blur the lines separating church and state. I’ve covered the subject of so-called “native advertising and “sponsored content” here and here.

And just last week, Buzzfeed’s Jonah Peretti set Twitter tongues-a-waggin’ by touting the growth of these quasi-editorial content plays at his new-age (and profitable) journalistic enterprise.

“Peretti also announced for the first time that the company â€” which has grown to more than 300 employees â€” is profitable, thanks in large part to the siteâ€™s use of sponsored content. Last year, the BuzzFeed founder said the site ran 265 such ad programs, which involve BuzzFeed staff creating posts that mimic the viral content it usually runs, but based around a topic related to the sponsor. Peretti said the site will do more than three times as many this year.” 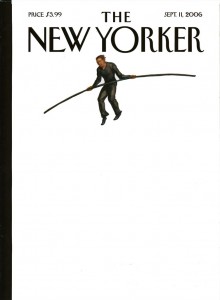 So while it’s clear that the lines continue to blur — even the venerable New Yorker is getting into the native ad game — there are some very good ethical reasons for their separation. This week, however, we learned of two instances where such a separation may not have been such a good idea.

Smack in the middle of Fashion Week, The New York Times (the paradigm for church-state separation)  ran a profile of a former Barney’s executive who was dismissed from the tony New York retailer (and huge Times advertiser). Adjacent to the editorial profile was a large Barney’s ad, which rightfully caused the retailer to go apoplectic. Here’s the recount from the New York Daily News:

“Barneys went bananas. As Fashion Week kicked off, the luxury department store threatened to pull advertising from The New York Times after the paper ran a profile of an ex-employee alongside a Barneys ad, Confidenti@l can exclusively reveal. 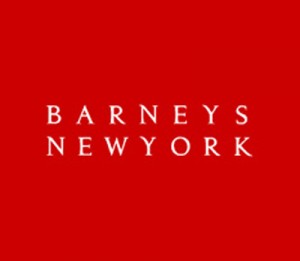 The Gray Ladyâ€™s Styles section on Thursday profiled Julie Gilhart, former director of Barneys New York, who is now a fashion consultant and works in the digital sphere. The 1,384-word piece was complimentary toward the tenacious Gilhart, who got the ax from Barneysâ€™ chief executive, Mark Lee, in 2010.

‘We were pissed because we thought it was insulting and embarrassing,’ said a source. ‘How dare The Times write an article about someone we fired and then place a massive, full page ad for us right next to the profile?’ Asked our source.” 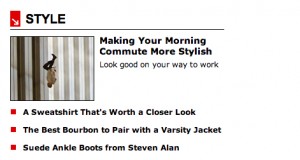 Could this have been a case of Google AdSense gone awry? Doubtful.

Separately, but not unrelated, we learned of another gaffe in which the ad and edit arms of Esquire Magazine experienced a communications breakdown. The publication beckoned readers in a “Style” ad to “look good on your way to work,” adjacent to my pal Dick Drew’s AP news photo of a man falling from one of the burning towers on 9/11.

To its credit, the magazine took to Twitter to assuage its offended readers.

Relax, everybody. There was a stupid technical glitch on our “Falling Man” story and it was fixed asap. We’re sorry for the confusion.
â€” Esquire Magazine (@Esquiremag) September 11, 2013

The New York Times made no such apology — at least not publicly.