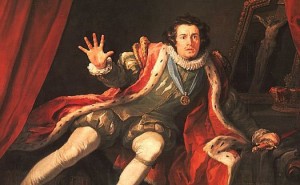 King Richard III: A horse! a horse! my kingdom for a horse!

The Israeli, American and British government PR functionaries are likely not feeling too buoyant this morning. The AP photo showing frightened Palestinian prisoners in their skivvies on the front page of The Times (and everywhere else) does not exactly contribute to the collective cause of the command and control crowd. It’s comparable to the memorable shot of Saddam in his briefs or even the candids from Abu Ghraib.

Frankly, I’d much rather see imprisoned terrorists reveling in the joy of killing innocent civilians. It makes efforts to galvanize public opinion against their depraved means so much easier. Still, this photo-op from the Jericho prison was not staged by the Israelis…at least I don’t think so. Perhaps the Palestinian Authority had a hand in the humanization of these exposed fellows?

Whoever mismanaged it will soon come to realize that these news pictures will command international media attention in news cycles to come, and as such, will have much greater PR and policy implications than the pre-emptive round-up and presumed legitimate incarceration of six known terrorists.

As for King Richard III, he was only human after all.