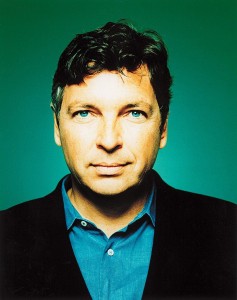 OK I’m sitting here at the opening session of the Always-On confab at New York’s fab Mandarin Oriental Hotel off Columbus Circle (Valley wags, eat your hearts out). Seated to my left is Heath Row, who many PR types may remember from his days as an ink-stained journo for Fast Company (in Boston) at a time when Fast Company was fueling the first digital revolution. (He now lives in Brooklyn and does some cool stuff as a full-timer with DoubleClick.

To my right is Adriana who is Always-On’s new digital video host. (It’s unlikely she’ll be interviewing this PR blogger anytime soon.) AO Founder Tony Perkins (pictured) and Bill Cleary (founder of Web 1.0’s once premier ad agency CKS Partners, i.e., eBay, Amazon, etc.) are on stage talking about how they got from point A to point B.

First slide: “62% of the content the average 21-year-old views online was produced by someone they know.” (Pew Institute)

Technorati chairman Peter Hirschberg has taken the stage. “We’re all suffering from a major disability…none of us are 12 years old.” Hirschberg takes us through some stats and video (ostensibly to promote his company). He then invites WPP’S Ogilvy co-CEO Carla Hendra to the stage to expound on the new partnership between the two enterprises. They’re calling it Conversational Marketing. (Staci, maybe Martin Sorrell does know a thing or two?)

He then announced a Digg-like section on the Technorati website called WTF (“Where’s The Fire”), e.g., with real-time live web stuff that lets the audience “curate” wiki-style.

Missed the panel with Eric Hippeau, Cleary Partners’ Bill Cleary and others last night. (It started 90 minutes after it was scheduled to.) So, I’m here this morning for the first panel of the day, moderated by Marketwatch’s SF-based Internet/new media/Web 2.0 reporter Bambi Francisco. In introducing Bambi, Cleary let it be known that she’s announcing a new venture today called “Vader,” no not Darth, but “Vator,” as in elevator pitch. More on that later…

Chinks in Google’s armor is the subject of the first panel (on the eve of the search monopoly’s earnings announcement (e.g., $2 billion for the quarter, Bambi says).