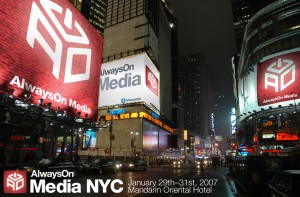 Here in the AO “Blogger Bullpen,” I see some familar faces. The woman blogger seated next to me started the day with a heavy-set blogger knocking a pitcher of ice water onto her pristine new MacBook Pro. Ugh! The machine refused to boot afterward. Apple, think Toughbook!

She went home to get another laptop, so replacing her in the seat next to me is Cluetrain (and Harvard’s) David Weinberger who’s agreed to chat with me later on my (mostly untrusty) digital audio recorder. I saw Sam Whitmore down from Boston, Edelman’s Me2 Man Rick Murray (standing in for Richard Edelman), and BuzzMachine’s Jeff Jarvis, two rows ahead.

Marketwatch’s media reporter Jon Friedman told me yesterday that in spite of repeated pleas by the organizers he was passing to cover instead the SIIA (Information Industry Association) Summit here in NY. I guess Time Inc.’s Ann Moore is a bigger draw than Tony Perkins.

Jon Medved of the Israeli start-up (launching today as a “closed beta”) Vringo is now on the stage giving a demo of his application that lets you send your friends’ your own video ringtones (ad-supported, naturally). Cool stuff…but what if you want only your own ringtone to play?