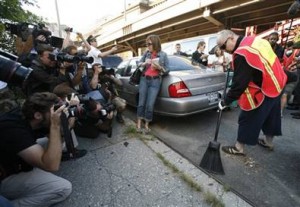 This was not exactly the photo-op Boy George envisioned for re-building his career. But sure enough, there he was early this morning on the streets of New York City performing his legally mandated community service chores as a garbage man, er, sanitation worker.

The 80’s pop star and Broadway wannabe yelled to the gaggle of media on hand:

“You think youâ€™re better than me? Go home. Let me do my community service.”

One has to feel bad for the flamboyant British transplant. This is the kind of come-uppance that Kate Moss deserved. Instead she gets to appear on the cover of Vanity Fair as Marlene Dietrich. Go figure.

Don’t expect to see Rosie come to her former paramour’s side. She’s too busy resurrecting her own image following her highly publicized failures in the publishing and theater worlds.

On the other hand, Meredith Vieira, Ms. O’Donnell’s predecessor on “The View, finally comes out of her quiet PR period with a prominent and deservedly positive profile in yesterday’s New York Times Magazine .

The Vieira piece likely marks the beginning of a carefully orchestrated PR effort to retain and build a new audience for the newly (configured) and still top-rated network morning show. Look for much more on Meredith as we approach her early morning debut next month.