Apple may not have to constantly contend with a corporate mission statement like “Don’t Be Evil,” but the world’s most esteemed brand certainly recognizes and understands the value of cultivating consumer confidence. It does so by building great products, including tomorrow’s public release of the iPad Air, which, if the (company-managed) reviews are any indication, will be a BOFFO seller.

The innovation and ergonomics of Apple’s product line have nearly always served as drivers of the company’s reputation, and a catalyst for the cult of Apple. From my first Mac LC to my iPhone, Macbook Pro, iPad2 and soon, an iPad Air today, I would definitely fall into the Apple fan boy category. Still, given the value of its devoted fan base, it never ceases to amaze me how heavy-handed, if not prickly, Apple can be sometimes act when bona fide criticism rears its head. 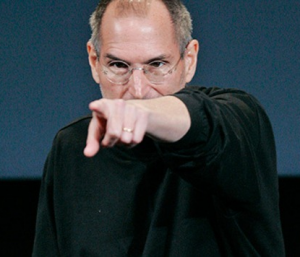 Wasn’t it Steve Jobs who personally poison-penned a post railing against Adobe Flash after Apple decided to drop it from its mobile operating system? And how over-the-top secretive and controlling was the development of the game-changing iPhone? Then there was the issue with the iPhone’s antenna for which the company took way too long to admit a mea culpa.

In fact, some may argue that Apple’s closely managed veil of secrecy, especially leading up to its fabled new product announcements, has actually contributed to the anticipatory hyperbole surrounding such announcements, thus producing record sales. Command and control of the message is clearly alive and well in Cupertino…for better or worse.

Today we learn that my old friend and former client Prof. Lawrence Lessig of Harvard Law School used Apple’s open forum to publicly gripe about a Wi-Fi issue he was having with his Apple’s latest mobile operating system iOS 7.  Now it’s one thing to ignore a public complaint from a tech-savvy influencer, as Dell did with Jeff Jarvis back in the day, but Apple completely ignored a growing tide of wi-fi complainants on a forum the company itself set up (and monitors) for this every reason.

“According to Violet Blue at ZDNet, some Apple users who upgraded to iOS 7 have been plagued with malfunctioning Wi-Fi, and since September have had their questions consistently ignored on Apple’s official forums. Lessig was one of those bitten by this bug.”

As for Prof. Lessig who discovered and posted a way to possibly address the problem, e.g., return the device under its warranty, Apple’s reaction was much more draconian. They expunged his advice altogether. He re-posted to the forum. It too was removed, followed by this explanation from Apple:

Recently you posted a poll or petition in Apple Support Communities. We are including a copy of your message at the end of this email for your reference. We understand the desire to share experiences in your topic, â€œRe: wifi greyed out after update to ios7 ,â€ but because these posts are not allowed on our forums, we have removed it.”

Professor Lessig, a founder of Creative Commons and not one to back away from a principled fight, took to his Tumblr blog to share the incident and his observations about the world’s most esteemed brand:

“Whatâ€™s striking about the comments on the Apple community site is the frustration â€” frustration because of Appleâ€™s apparent policy not to respond to comments. Unlike really helpful companies which try to reward people who spend time making community boards the best source for technical support by engaging with posts, and at least acknowledging the problems, Appleâ€™s policy seems to be a â€œnever commentâ€ policy. Which leads its users â€” and again, people who are volunteering their time to help lower Appleâ€™s customer support cost â€” to express increasing exasperation at the unanswered problems.”

The media attention that Prof. Lessig has drawn to the issue will no doubt pose bigger problems for Apple than it had bargained for. Again, why doesn’t the company actively monitor and engage with the users of its product forums? Isn’t this standard operating CRM nowadays? Scratching my head here.