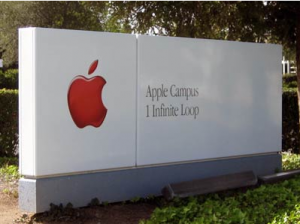 Co-founder Evan Williams reportedly rebuffed Google’s overtures. TC has a “normally reliable” source who says that Apple expects to announce the deal in June…if there even is a deal.

To its credit, TechCrunch does hedge with the following:

“Twitter is strongly signaling that it doesnâ€™t want to sell at any price right now. The founders took significant money off the table in the last round valuing Twitter at $250 million, weâ€™ve heard, and are aligned with investors to see Twitter through to the end.”

Boy, the PR folks at Apple must be keeping busy, or maybe not. Does this rumor rise to the level that warrants a company response? Should the Cupertino communications corps be required to answer the TechCrunch-catalyzed reporters’ calls and emails? I bet a prominent Wall Street Journal newspaper piece would give them sufficient motivation to craft a statement.

Well, the Journal did weigh in, sort of. Kara Swisher of All Things D posts “Ignore the Twitter Buyout Rumors.” (She seems to revel in tweaking — as opposed to tweeting — her competitors.)

On Friday, I presided over a PRSA panel featuring some hefty bloggers including Curbed, HuffPost, Mashable, BusinessWeek and Inhabitat. While we all pretty much agreed that many A-list bloggers have entered the mainstream – in terms of the quality of their journalism and influence over the national news agenda — we still wondered why a story in one of the big mainstream media outlets continues to supersede blogs in the eyes of corporate America.

Why does a print hit in The Times or Journal still have greater PR cache than an online-only piece? The latter clearly reaches a wider audience with its link-driven capacity to go viral. Isn’t this what really matters?

As for the conjecture from TechCrunch, few would argue with Michael Arrington’s ability to get tongues-a-wagging. It’s just not the tongues of Apple’s PR department…for now.