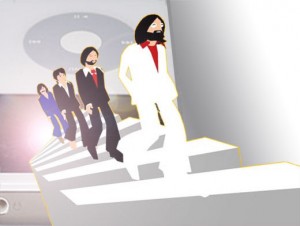 Keeping with the company’s fabled adherence to communications secrecy, the note simply announced that Apple planned an “event” in San Francisco on September 9th. It featured the iconic iPod image of a dancer, white headphones and all, with a piece of the lyric “It’s only rock ‘n roll, but we like it.”

That’s all it took to catalyze massive speculation on what the world’s most esteemed consumer electronics brand was up to. (Ahhh. If only it were this easy for most of our clients!)

Personally, I think the announcement has something to do with The Beatles’ discography finally fining its way onto iTunes, but perhaps we’ll see a new product or two. Then there’s the prospect of Steve Jobs appearing on stage where he’s been so sorely missed. What about Steve Jobs, Paul McCartney and Ringo Starr in tandem? Apple just has so many “mediable” assets with which to play.

I wonder how the company’s PR department would fare working the Sanyo business?

Image above courtesy of CrunchGear