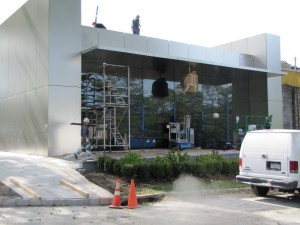 Boy oh boy. Apple (AAPL) is on a real tear. Boffo earnings and equally boffo rumors including one alleging that Verizon is testing a 4G iPhone (take that AT&T!), keeps that brand in a state of PR nirvana.

As a result, the company’s legendary PR department continues to grow in stature. Deservedly? I wonder.

It seems like eons ago when Apple couldn’t get any mainstream respect. Does the name Gil Amelio ring a bell? After my former Intel client jumped ship to join Apple’s PR team, she invited me to submit a proposal to help extend the company’s rabid following beyond those die-hard attendees at the annual Macworld Expos.

Separately, for our Ziff-Davis Publishing client, we invited local TV reporters to accompany one of our Mac enthusiast magazine editors to a computer superstore to conduct a Pepsi-like challenge. The Mac prevailed on a number of levels. Hence, the PR idea was born: we would propose to Apple that they challenge the Wintel PC juggernaut in cities everywhere. As a veteran of the cola, burger, sneaker and toothpaste wars, I was up for a fight. Bring ’em on!

The proposal went nowhere, though today I smile when I see Apple’s “I’m a PC and I’m a Mac” advertising creatives. Maybe it was time to give the Cupertino company another try? I noticed that Apple was about to open a shiny new store (see pic above) in my hometown. I tweeted on it a few times, but thought I could do more.

I dropped a note to the Apple PR person listed on previous store opening releases offering Flatiron‘s services to help engage local media influentials. No reply. (Not even a thanks, but no thanks.) No biggie. After the store finally opened on Saturday, I checked back to see whether Apple’s vaunted PR machine succeeded in gaining any local (eg,. traffic-building) media traction.

I then learned the secret of how Apple PR rolls. The company issued, via PR Newswire, a media advisory inviting “accredited” journalists to call a number in northern CA to gain access to the store one hour before the doors open to the public. PR Newswire?! Could this be the store-opening PR team’s main modus operandi? The media coverage spoke for itself:

Nothing from Newsday, The New York Times, News12 L.I., Anton Publications, FioS Channel 1, L.I. bureaus of local broadcast, News 55 L.I…. Not even the local weekly. But then again, this is Apple. One-to-one media engagement? Not necessary. The store will be packed regardless.

Ironically, it is Microsoft that seems to be deploying the Pepsi Challenge: the day before the new Apple store opened, Reuters moved a piece touting Microsoft’s first retail store.

Photo: Peter Himler with a Canon PowerShot SX20 IS