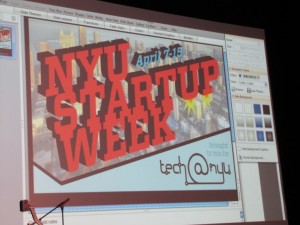 Here’s an exchange with my dentist during a recent visit:

Dentist: “My son will soon graduate from college and he still doesn’t have a full-time job.”
Me: “What did he study?”
Dentist: “Computer programming.”
Me: “So he’s a hack?”
Dentist: “I guess you can call it that.”
Me: “Does he plan to reside in New York?”
Dentist: “Yes” 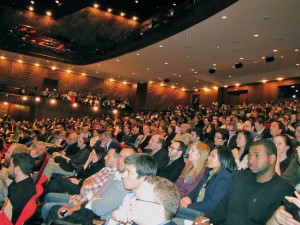 Hmmm. This kid doesn’t realize it, but he’s got it made! One of the speakers last night at the always-uplifting New York Tech Meetup stoked the programmers in the SRO audience of 850+/- with an invite to tomorrow’s New York City Start-Up Job Fair. Many of the companies seeking talent had their public debuts on this very stage.

Another interstitial presenter wanted to make sure that the digitally discerning audience was aware that today starts NYU Start-Up Week, while yet another from Collabracode cajoled savvy programmers to up their JavaScript and jQuery games with a six-week crash course starting April 20. 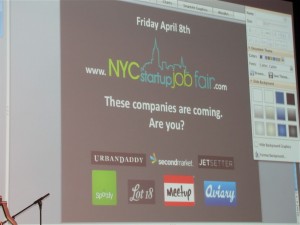 (He baited the group with the fact that New York City has more programmers than any other city anywhere, the Valley included.) Then there was Readability’s API contest with its $5000 grand prize and a deadline of May 15.

With its 17,500 members — the largest of all the Meetup groups — and a new full-time chief in Jessica Lawrence (no girl scout) who took the podium to gush at the prospects of working with a community that really “makes a difference,” the New York Tech Meetup should probably be the first stop on my dentist’s son’s post-college networking itinerary. And I told him as much (in between rinsings). 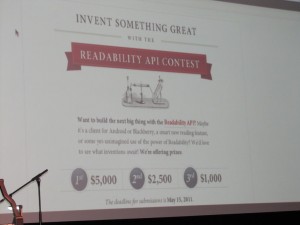 Of course, the evening’s main attraction could be found in the hand-selected group of start-ups that each were bequeathed five minutes or so to showcase their digital apps and platforms. All had their allure, and the presenting styles varied, including one guy who tried moderator Nate Westheimer’s patience with exceedingly long answers to seemingly simple questions.

Some of the companies that drew the admiration of this blogger, and this most-sophisticated audience, were as follows:

Message Party – a geo-blogging service incubated at Y-Combinator that pivoted for launching yesterday in NYC. The app aggregates web content and tags it to specific locations. I asked presenter Amanda Peyton whether she envisions collaborating (a la 4Sq) with the (commercial) venues getting tagged, and what about negative posts. She said it was too early to project what if any interaction will exist with these venues, but that she does not see moderating the location-specific content.

Atavist – As media companies, mostly from the print journalism side of the content-creation equation, grapple with how best to integrate text, video, graphics, stills into their product, it was refreshing (and exciting) to see a boutique book publisher bring its rendition of this new paradigm to life for the literati.

Lemonade Stand – anointed “hack-of-the-month” and incubated on the bus-ride to SxSW, this “neighborly commerce platform enables people to buy and sell goods quickly and painlessly within their communities.” Not a good idea to diss Craig’s List with Craig Newmark in the audience last night. Best moment: when an audience member asked if the platform could also work for “services.” (I wonder if the Craig’s List reference sparked that question?) 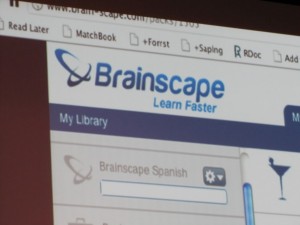 Brainscape – “a web/mobile reading platform that helps you learn anything faster based on the latest cognitive science.” Gee, I wish I had this on those long car rides with my boys doing SAT vocab words! But then again, the IPhone and IPad weren’t around either.

MeeGenius – This one’s for the 2-8 year-old crowd according to David Park, MeeGenius’s co-founder who I chatted up following the event. Any young parents in the audience? If not, there should have been. They would have learned about an app that allows users to customize and personalize a selection of early childhood books, which can play out on virtually any digital platform.

Best audience suggestion: Contacting the armed services to let soldiers read to their kids virtually from afar. David’s answer: we tried, but can’t seem to get a response.

Runens – Loved these guys. Maybe it was their Brazilian (i.e., Portuguese) accents. In either case, they’ve got the social running scene figured out. Geo-based with all kinds of bells & whistles to improve your personal running goals, and maybe even allow you to meet like-minded hoofers while doing so. 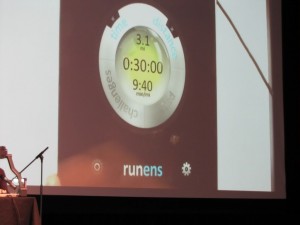 Other showcase start-ups included Ex Fm, Readability, ImUp4, Addieu, Ask Local, and Corkboard. Not a loser in the bunch IMHO. Be sure to check them out.