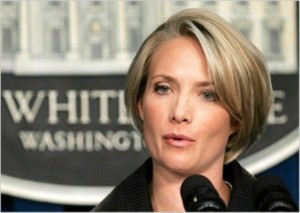 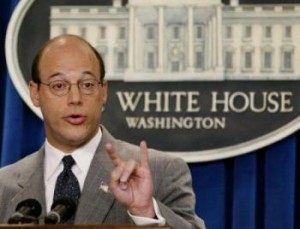 From The AP: “This country does not torture,” White House press secretary Dana Perino told reporters. “It is a policy of the United States that we do not torture and we do not.”

Sure, Dana. And President Clinton “did not have sex with that woman.”

Don’t you hate it when press secretaries lie? And how can one even compare these similar-sounding, but extraordinarily different breeches of confidence? Sure both take poetic license to a dangerous place, but it’s beyond me that one can even cite Mr. Clinton’s transgression in the same sentence as those emanating from Mr. Bush.

A few year’s back when this President’s duplicitous former mouthpiece Ari Fleischer was poised to make a few bucks by publishing his memoirs, one of the established PR organizations invited him to speak at a luncheon in New York. He approached the podium to give his canned speech and the crowd of PR lemmings welcomed him with thunderous applause. “A celebrity among us,” some must have been thinking. When he was finished, they crowded around him like he was Richard Dreyfuss in the final scene of Close Encounters.

I was very tempted to stand up and ask the bald-headed and bald-faced dweeb (who today is finally being seen as the fraud that he was and is) whether he would resign a client that intentionally asked him to lie on its behalf. I mean isn’t that one of the absolute no-no’s of the Council of PR Firms? I decided to hold my New York born and bred tongue.

Every time I see Dana Perino, as smart and attractive as she appears, I kick myself for not having the chutzpah to corner Mr. Fleischer on how he sold his soul to the devil, and what it has cost this nation. Dana, any public speaking engagements planned for New York?