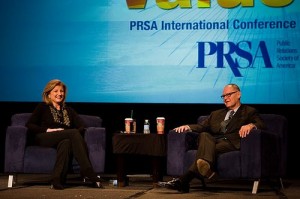 I just returned from the annual PRSA confab in San Diego where thousands gathered to hear what’s what in the PR biz.

I would have liked to have lingered another day (SD is such a fab city), but today PCNY held its own confab in NY where 160 PR pros heard producers for GMA, Nightline, The Takeaway, Dr. Oz and Beet.TV share what’s what in the broadcast biz.

Back to sunny San Diego. PRSA’s powers-that-be had the acuity to invite the namesake of the world’s top-ranked blog to address the SRO PR crowd. Ms. Huffington offered her deeply accented (think Eva Gabor), but very clear perspectives on the PR profession (i.e., she recognizes and appreciates our purpose in life) and insights on the changed media landscape and news gathering process.

Here are a smattering of paraphrased quotes from her session for which she was intro’d as “a major player in the new world media” — @AriannaHuff at #PRSA09:

“…this is an amazing turning point.” [for news consumers]”

“…the press release is becoming more and more obsolete…even though we still do it at the huffington post.”

“..the more social tools we use (fb, twitter, blogs) the more powerful the resulting action becomes.”

“…viral communications is affecting everything you communicate.”

She extols virtues of citizen journalists [to the detriment of traditional journalists], citing “Off the Bus” experiment in ’08

She supported Joe Biden’s call to withdraw from Afghanistan, but used the headline “Joe Biden Should Resign” to incite drama.

If she hadn’t “framed” the Joe Biden story that way, instead of 1000 visitors, it wouldn’t have gotten the kind of mass attention that it did

“…there are a million and a half homeless children in country, what if we constructed a giant balloon?!”

“…in many of the causes you’re going to support, touching people’s hearts is more impt. than touching their minds”

“…it’s a real exciting time to be in PR and journalism professions” it’s all about listening now, not just talking.”

She offers PR peeps the opportunity to write on HuffPost “because that’s how we grow.”

“It [the media] is no longer about proprietary content anymore, ubiquity is what matters” [no paid walls]”

Ms. Huffington was then joined by Wendell Potter, the former in-house communications exec for CIGNA who had the courage to expose his former employer — at great personal and professional risk/expense — for the misinformation the insurance giant spewed on health care reform. Frankly, in my professional opinion, the industry practice of creating “front groups” (for astroturfing purposes) poses the single greatest reputational risk to the PR profession today. (And between you and me, there isn’t a large agency that doesn’t do it.)

Here’s what @WendellPotter had to say:

“I would suggest [to others} to do ‘an ethics check,” e.g., is your job something you’re proud of doing?”

“…with decline of msm, we are all now self-selecting, which makes it easier for special interests (teabaggers) to flourish.”

@arriannahuff “I think [PR pros] are held in higher esteem than Congress.”

He read JFK’s “profiles in courage,” richard branson’s “screw it, just do it” when faced with prospect of never working in corp pr again

Receives standing ovation from PR crowd for his courage to stand up to healthcare insurance biz’s deceptions.

To listen to the entire keynote, click here. Excuse the quality. (TRT: 52 mins.)

The goal was to examine both the new and the old in an effort to get a fix on what core PR competencies transcend the new world PR order. For example, I rhetorically asked the question: is traditional media relations on its way out? I cited the number of agencies whose clients still sustain them through mainstream media relations ONLY.

This is where Greg Jarboe weighed in with some very sobering stats (for MSM only-focused shops):

“According to The State of News Media for 2009, which is published by the Pew Project for Excellence in Journalism, 5,900 full-time newsroom jobs, 11% of the total at America’s newspapers, were cut in 2008. By the end of 2009, newsrooms of American daily newspapers may employ 25% fewer people than they did in 2001.

Ad Age estimates that just under 150,000 people worked in magazines in 2008, down from about 170,000 in 2000. And in local television, news staffs, already too small to adequately cover their communities, are being cut at unprecedented rates.”

Read his post from Search Engine Watch. I chimed back that media relations is alive and well, and that the media universe is actually exploding when you consider the blogosphere and individual influencers (on Twitter and elsewhere). Greg quickly reminded me that my question pertained to “mainstream media.”

We did end up concurring that blogger relations/engagement does not fall under the “social media” banner anyway. It’s traditional media relations, albeit with a different breed of media who gerninate their posts from many sources outside the PR realm. What about bloggers being bought? Well that’s another subject, also covered by the panel.