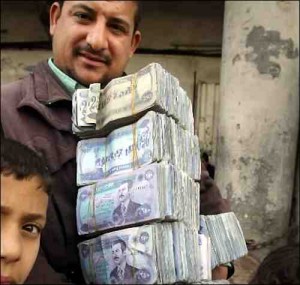 This blog periodically reports on the nefarious practices that taint the PR profession. Most recently, it turned its sights on The Beltway and the revelations on the illegal influence peddling by some once-esteemed “public affairs” practitioners. Think Jack Abramoff. The point of the DC-bashing post was to give the industry’s trade groups a wake-up call, for fear of a further denigration of the profession.

Sure enough, the pattern of PR ethical abuse from Washington continues unabated in the present news cycle. Taking a page from the Armstrong Williams fiasco, and apparently not learning its lesson, the government reportedly has now deployed its “pay for play” strategy in Iraq. A Washington PR firm is being paid “millions” to create and pay to have published pro-American news copy under the guise of news reported by Iraqi journalists. This was predictable given the fact that the Feds initially retained an advertising exec, albeit a most accomplished one, to mount a PR/communications campaign to change Arab perceptions of this nation.

It should be known that the rules of media engagement varies greatly from country to country. In reality, the seemingly abhorrent practice of paying journalists for coverage is more commonplace than one would think. Even so, it is this blogger’s opinion that the U.S. government, for any number of reasons, should refrain from this breach of public relations ethics. It is also the hope of this blogger that our industry thought-leaders and associations step up to strongly condemn journalistic payola.