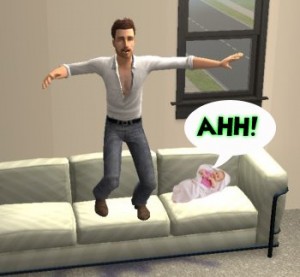 Journalists bristle at the notion of being manipulated. The moment their sensory nodes detect “the spin,” the PR practitioner’s carefully orchestrated “news” falls at risk of taking a decidedly negative turn. It’s almost as if there’s a chapter in J-School that warns future members of the fourth estate to recoil at any hint of artifice.

With this in mind, we arrive at today’s story from New York Times scribe Caryn James in which she offers a perceptive, if not harsh assessment of TomKat’s attempt to manage their way out of reputation hell on the tiny back of their first born child. Here’s an excerpt from her piece titled: “A Rich Coat of Gloss on a Trajectory Spiraling Down:”

“The extravagantly orchestrated photo shoot reveals a media circus masquerading as ordinary life, and speaks to the devil’s bargain some celebrities make with the public…Ordinary parents protect their children…that’s an impulse the public can identify with in the celebrity game. Suri’s parents might have gotten more mileage out of releasing a modest family snapshot and leaving it at that, shutting down the media frenzy without inventing a bigger show of their own. A show is clearly what they were looking for, but the entire over-the-top operation, the famous photographer, the photo so hyped it was revealed on Katie Couric’s first newscast as CBS anchor Tuesday carries a whiff of desperation”

Let’s not confuse creativity with poor instincts. Sure, photo-ops featuring the world’s largest this or that remain valid, and will certainly produce a fair share of benign media attention…especially among TV newsers.

But for re-building tainted reputations — with the luxury of the media anxiously awaiting their cue to sound the trumpets — it’s important to step back and carefully consider how the simulated scenario will play out in the court of public opinion, and then adjust accordingly.

After all, this is what seasoned PR people get paid the big bucks for, right? I’m sure the success of the Cruise baby PR machine wasn’t being judged by the amount of boffo ink and airtime garnered for these ultra A-list celebrity clients. But then again, whose interests were really served here: the Cruise family’s or the glossy monthly’s?