I’m always amazed how the New York Tech Meetup never fails to fill that 800-seat Skirball Center at NYU for its monthly showcases of “the next big thing.” This was especially true on Tuesday evening when the skies refused to acquiesce even to the U.S. Open, now in full swing just 10 miles to the east.

I arrived promptly at 7pm and quickly found my fellow Tufts alum Laurie Jakobsen in her usual spot handling PR chores for the SRO event. (Toward the end of the session, I was glad to hear moderator Nate Westheimer (at left in his end-of-summer board shorts) give her PRops from the podium.)

In the days leading up to the September #NYTM, a couple of reps for presenting startups reached out to put their companies on this blogger’s radar. Most journalists ignore such overtures, but having been on the other side of this media equation, I certainly empathized with and appreciated the pro-acticity of the folks at MoveableFeastMedia and CalorieCount.com (“Hack-of-the-Month”).

So I made my way down to my usual spot in the auditorium in the left front orchestra seats adjacent to the special area filled with fidgety presenters in their logo’d t-shirts awaiting their star turns. A few seats to my right was a relatively young boy sitting next to his Dad whom I recognized immediately. It was former NBCUniversal chief Jeff Zucker attending his first NYTM.

Across the aisle, I also recognized former Paine Webber chief Donald Marron who now chairs and heads the investment committee of Lightyear Capital, a PE firm with a good book of business in technology. Very cool. I mentioned to Zucker that I also had brought my son to a NYTM earlier this summer to which he replied that it was his son who actually brought him. (Future coder, I imagine.)

But the real stars of the evening’s event were the ebullient presenters and their coded creations. Here are some of my faves (in no order of preference):

TaskRabbit – Pint-sized presenter Leah Busque, founder and CEO of this (job-creating) startup that raised $5 million last spring to expand nationally, quickly disarmed the usually jaded audience with a very tight presentation on the virtues of this mobile and web urban marketplace that lets people get their tasks accomplished easily and inexpensively. I especially liked the filters TaskRabbit uses to screen prospective service providers.

GoJee — So what do you crave for dinner tonight? Or better, what’s in your fridge that can be combined into something edible for dinner tonight? The team at GoJee has amassed a mammoth, human-curated searchable database of independent food blogs that offer quality recipes. What’s more, the images of the dishes featured make even the most finicky eaters salivate with dining desire. Given the myriad food blogs around the world, I just wonder whether a small internal team can cast a wide enough net to capture and curate the best culinary creations out there. Perhaps a crowdsourced solution could work? Epicurious, move over. 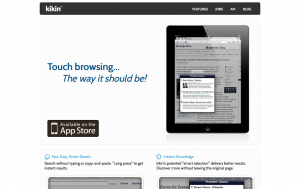 Kikin – As a new owner of an iPad2 and an avid user of Chrome and occasionally Firefox, I have issues getting used to the iOS default browser Safari. Enter Kikin, now in the iPad App Store, whose founder Brian Rogers audaciously called Safari’s iPad browser experience “barbaric’ compared to his browser app. It was also good to hear him answer my question about Kikin’s ability to easily copy or share the page URL (in addition to text on the page).

Ingenuitas – Who knew there was such a thing as SimpleCV? Having repped one of the top 2D barcode companies, it was cool to see how far visual recognition technology has advanced. The company’s principals have serious tech and coding cred. Here’s how they start to describe SimpleCV on their website:

“SimpleCV is a Python interface to several powerful open source computer vision libraries, in a single convenient package. With it, your software can have access to high level algorithms in feature detection, filtering, and pattern recognition without wrangling with separate libraries.”

I’ll take their word for it.

CalorieCount – Finally, as someone who’s licked the exercise part of the weight management equation, but who struggles with the intake piece, I was glad to learn about CalorieCount.com. The founders have spent some seven years scanning hundreds of thousands of nutrition labels. What’s cooler (and different) for the “Hack-of-theMonth,” the mobile app allows the user to simply say what he or she has eaten (versus keying it in) and it’s logged. Nicely done.

All in all, another great showing. Very curious to know how Mr. Zucker and Mr. Marron felt about the evening.