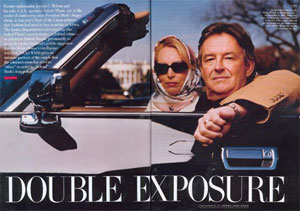 Month after month, the PR teams at Conde Nast’s glam glossies pour through their respective magazine’s galleys to hone in on the content and controversy that will create a buzz.

From Vanity Fair’s James Bond-like photo of CIA agent (and now author) Valerie Plame and her husband to British Vogue’s cover of a tainted, but still alluring Kate Moss, most have great material with which to lure the attention of the media-catalytic New York Post, or a wire service.

In spite of the pundits’ predictions of print publishing’s demise, the Conde Nast books, above all others, still hold considerable editorial cache and compelling advertising creative.

For the privately-held company’s PR folks, the best case scenario occurs when their glossies set their sights on the famous, or infamous, prompting the object of their affection/disaffection to issue a very public response. This weekend Michael Jackson blew a gasket when he got a look at the “Where’s Michael” photo layout in the current issue of GQ.

Mr. Jackson’s PR rep apparently failed to dissuade the gloved one from stirring the media pot, thus saving the magazine’s publicists the chore of trying to drum up some buzz for the current issue (featuring an overexposed Tom Cruise on the cover). ”

In a statement, Jackson’s representative, Raymone Bain, said: “Mr Jackson is furious that his image has been used in such a misleading way, and is demanding an apology from the editors of GQ, and its publisher, Conde Nast. Mr Jackson is also demanding that the magazines be pulled from newsstands.”

“It is very clear that the pictures in the story… are satirical, whether it’s a picture of a Michael Jackson imitator sitting in a Bahraini cinema or an image of The Gloved One standing flamboyantly in the desert. Mr Jackson may feel that the person in the photographs is an ‘impostor’, but he is merely an imitator,” said Nelson.