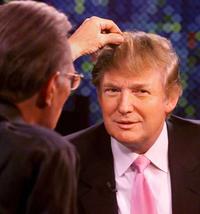 Shaved heads and The Donald. Is there anything closer to Nirvana in today’s popular culture? Well, yes, there is. Add the taint of world wrestling to the mix, and you get the picture.

News Flash from yesterday’s Detroit Free Press : wrestlers representing Donald Trump and WWE’s Vince McMahon will face off in a Detroit ring on April Fool’s Day in Battle of the Billionaires. The “loser” shaves his head. (Could this be true?)

Now I know many of you were hoping to see The Donald and Rosie come to fisticuffs. And I’m sure you would have settled with the loser getting a baldy (versus a bloody skull). Unfortunately, we’re stuck with two of the planet’s biggest self-promoting pugilistic pretenders as opposed to a modern twisted version of Billy Jean King versus Bobby Riggs.

Since we’ve already entered the realm of disbelief (and there are no negatives in a brainstorm), I would like to recommend three publicity-producing add-ons:

Donald, Vince — you guys aren’t above that, are you?