When my #2 son was running for class president as a 5th grader, I had a brilliant idea for a campaign slogan, or so I thought.  The flyer looked like this: 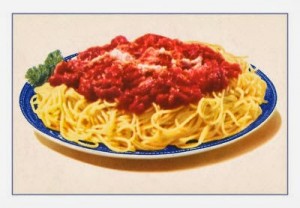 After all, who didn’t like spaghetti? It had universal appeal — especially to the grade school electorate.  -My son didn’t think so, and flatly rejected my flair for the creative. (Teddy always had a more grounded outlook on life than his Dad.)

Today, we learn that the chairman of the world’s leading pasta maker — Barilla — wishes he was more in touch with the universal appeal of his signature product.

Company namesake Guido Barilla, during a radio interview, proclaimed that his company’s advertising would never feature a family with two Moms or two Dads. Specifically he said:

“Ours is a classic family where the woman plays a fundamental role,” he said, adding that if gay people “like our pasta and our advertising, they’ll eat our pasta. If they don’t like it, then they will not eat it, and they will eat another brand.”

Needless to say, this faux pas has not unexpectedly caused an uproar, let alone a consumer boycott in Italy, which if the media echo chamber takes hold, will likely spread elsewhere.

Ironically, in 2012 JC Penney also precipitated a consumer boycott of its stores when it ran a Father’s Day ad featuring two Dads. To its credit, the retailer took offense to the offended, and stood its ground.

Separately, but perhaps not unrelated, Cheerios was the object of scorn from another (the same?) group of less-than-tolerant Americans when it aired a TV spot featuring a mixed race couple. The company stood up to the haters, and eventually was rewarded with enhanced brand awareness and reputation (maybe even product sales).

Barilla has a full-blown crisis on its hands – one that will require a considerable amount of contrition, i.e., no al dente here. In English also, please.

As for Teddy, I think he won that election even without his Dad’s creative copywriting.

UPDATE 9/27: Sure enough, Mr. Barilla’s unfortunate position of intolerance in Italy captured global imaginations. MoveOn.org has now joined the fray by urging its myriad members to boycott the pasta maker.

While we cannot undo words that have been said, we can apologize. To all of those that we have hurt or offended, we are deeply sorry.