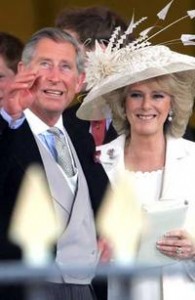 I’ve written about them previously, as has my old friend MSNBC “Scooper” Jeannette Walls, but you have to give the folks at the increasingly mainstream animal rights activist group, PETA, credit for their PR acumen. We can still expect the blood-throwing-on-the-fashion-editor trick to conjure up some newsworthy images, but now PETA has set its sights on the fur hats worn by Buckingham Palace guards.

And guess who PETA will dog during their upcoming trip to the U.S.? Prince Charles and his new bride. Might there be a chance encounter for the royal couple with the star of TV’s “Stacked” Pam Anderson, an active PETA member, who was born in British Columbia? Now there’s a money-making photo from some paparrazzo!