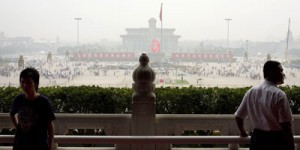 Chinese Clash with Protesters at Torch Run in Seoul

In little more than a week’s time, China will open its doors to the eyes and ears of the world, as captured, recorded and dissected ad nausea by the so-called free media. I wonder if the politicos there truly knew what they were getting into following IOC’s 2001 jubilant designation of Beijing as the 2008 Olympic Games host city?
Be careful what you wish for…is the title of David Glenn Cox’s post this morning in Daily Kos:

The Peoples Corporate Republic of China, the world’s largest slave labor plantation, have sought desperately to showcase to the world their Two Systems -One China policy by hosting the Olympic games.

Can they pull it off? Will “the thrill of victory and agony of defeat” overshadow all else? How can you keep all those bloggers down on the farm?

From this blogger’s perspective, I’d say you’d be hard pressed to find a PR pro who wouldn’t agree that the Herculean PR task with which China is now confronted — as the media spotlight takes focus — makes all others pale in comparison.