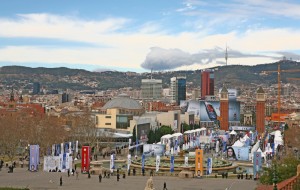 Journalists can sometimes be a curmudgeonly bunch. Take this British chap covering the 3GSM World Congress in Barcelona this week. Apparently, his inability to land an ethernet connection in the event’s press room produced a hissy fit and general castigation of the global telecon show:

“3GSM -The most boring ever? Or just incompetent PR?”

He even dissed the tea:

“I haven’t spoken to many people here in Barcelona prepared to dispute the suggestion that this is probably the most dull, irrelevant and uninteresting Congress for years. In a world where publicity is the lifeblood of every industry, it’s hard to imagine why the GSMA would deliberately prevent journalists from writing about the 3GSM show. And yet, that’s what they’ve done. Is this because they are trying to reduce the bad publicity?”

Hey Guy, it could be worse. You could be out there doing a stand-up at the Hard Rock Seminole in Hollywood…Florida.

I don’t see the folks at PaidContent’s MocoNews.net complaining. Rafat’s followers set up a dedicated site to report on what’s what in the wonderful world of wireless. Moco reported that Apple was conspicuously absent from the global mobile confab, but its presence was felt. T-Mobile’s CEO (not unexpectedly) had this to say about the iPhone:

“It could become concerning, we donâ€™t know,” he said. “A surprising aspect is the aspect of exclusivity. This doesn’t necessarily go hand in hand with promoting usage – as soon as you limit yourself to a certain supplier, you limit yourself. Itâ€™s not 100 percent clear what the benefits of this exclusivity are. This could become concerning if not managed. We donâ€™t know what the success of iPhone will be … it’s not guaranteed that this model is successful. The iTunes phone model wasn’t as successful as expected. There are a number of competing offers.”

Anyway, I hope Guy gets his ethernet since the free wireless hotspot in the lounge didn’t cut it for him either:

“In reality, I’ve used faster GPRS links, in a tunnel, the wrong side of a mountain, on a boat, in the Ionian sea. Just logging in took two or three minutes and as for getting your online editor to work…”

Maybe Guy has a point. One would think that for this particular conference, the press room would be adequately enabled for the hordes of journalists expected. But then again, I read the piece in the Journal today about people who go into withdrawal from being untethered. Makes you think.