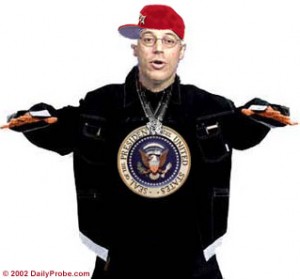 You’d be hard-pressed to find a PR calling that beats national politics as a springier springboard to a high-paying, high-profile gig. Makes little difference what you did or how you performed.

If you can claim spokesperson duties for any member of the Executive Branch, and you didn’t screw-up too badly, you can invariably write your ticket after bolting the Beltway boiler room.

Here’s a nugget from today’s Crain’s New York‘s daily alert about one of the President’s men who just hung his shady shingle at the venerable sports management firm that numbers Tiger Woods among its many vaunted clients:

Or to hear Mr. Fleischer rationalize it:

â€œSports reporters are now every bit as aggressive and assertive as political reporters. And most people in sports donâ€™t know how, and donâ€™t want to handle them.â€

Sure, Ari. Just “handle” them with deception.

Not only did Mr. Fleischer knowingly perpetuate a massive hoax on the American people, but to this day — after 4050 American deaths and many times that of Americans wounded — he has expressed no contrition for his treasonous behavior. He’s proud to have just stood up there day in and day out spewing double-speak to propagate a now-disastrous war.

But wait a minute, didn’t he pepper the daily White House presser with a few sporty metaphors? Now that’s the ticket out of the bleachers! Here’s a quote from the IMG SVP who apparently opened his company’s locker room to Mr. Fleischer:

â€œIâ€™m a C-Span junkie, and I noticed that in his press conferences Ari always used a lot of sports references.â€

I’ll never understand corporate America’s fascination with Washington. Does Pennsylvania Avenue have it over Madison Avenue or Silicon Valley in the PR smarts department? I don’t buy it, and nor should have IMG.