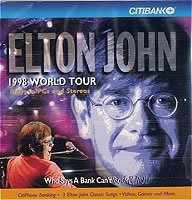 Alba to wed. Fraser to divorce. Fergie to wed. Penn to divorce. Ahhh. All in a day’s work for the modern entertainment publicist.

It made little difference that on the other side of the world, profound tragedy thrust an unstable nuclear power into an even more dangerous state of instability. No matter: the entertainment media machine still needs fuel to keep it firing on all cylinders.

About ten years ago, I handled a news conference wherein Citibank announced an ad campaign featuring Sir Elton John and its sponsorship of his global tour. (No, he was not asked to promote Citi’s sub-prime mortgages.) We held the event in Miami where Sir Elton took the stage to accept his own (oversized) Citibank ATM card.

On that very day, however, even more momentous events were brewing. They included: the Pope’s first mass in Cuba, the Unabomber’s guilty plea and sentencing, and the lurid revelations about a famous blue dress worn by an intern named Monica. Talk about a tumultuous trifecta to dampen any publicist’s hopes for national media coverage!

No biggie. In spite of it all, the Citibank-Elton John hook-up reverberated far and wide. This was at a time when the business of celebrity-driven media was confined to a few, albeit influential outlets. Nowadays, the sheer volume of gossipists all but guarantees an airing (or more likely, a posting). In spite of the changed media landscape, entertainment coverage remains a most insular beat.