@MarkRaganCEO Fleishman CEO doesn’t tweet, has no Facebook page, and uses ghostwriters to help with his blog

Mr. Ragan’s goal: to incite eyeballs to his daily aggregated PR newsfeed. This particular piece took those he baited to a Q and A with Mr. Senay that appeared Friday in Canada’s most influential business publication, The Globe and Mail. It was titled “Power to the PR People.”

The piece comes on the heals of a PR Newser post last week of a growing social media presence under the HeishmanFlillard pseudo-name that reportedly is being fueled by former F-H personnel. 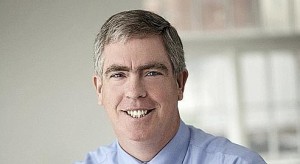 But back to Mr. Senay (at right) whom I’ve never met, but have heard only positive things about. He explains his absence from the Twitterverse and blogosphere as follows:

“I have a heavily read internal blog; that’s where I concentrate my time. I post two or three times a week. I probably write 90 per cent, at least. When I’m on the road, I’ll ask somebody to ghostwrite something if I can’t be there, then I’ll rewrite it.

We’ve got 2,400 other thought leaders out there, and I’ve tried to create an environment where they’re the ones who are making their mark.”

Professionally, I’m not bothered by the insinuation that the CEO of one of the industry’s most respected large firms is not as personally engaged with the social graph as others in his organization. In a client-service organization, it is probably more important for day-to-day account teams to tool with the tools, and senior management to encourage and support it.

“My job, I think, is to create an environment where all this adaptation takes place in real time. And almost instantaneously, because I think there’s two traits of a successful firm in this era: One is instantaneousness â€“ how quickly can you turn the information, contextualize it, put it for or against your client or your opponent. The second is anticipation.”

Yet I do believe, as his real-time allows, Mr. Senay would benefit greatly by listening to a Twitter selection of authoritative voices from the PR, marketing and media industries, and perhaps those of his firm’s top-tier clients. Start with Sawhorse Media’s Listorious and Muckrack, then Twiangulate from there.

I know many professionals on the Fleishman-Hillard Digital team who more than account for the agency’s digital cred. It’s a misnomer to think that social media savvy only resides in a handful of boutique specialty firms. In fact, I’m looking forward to attending the April 19 Social Business Edge event that Stowe Boyd and others have organized at F-H’s New York offices. Hope to see you there.