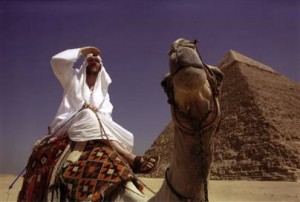 Could it be that Morgan “Super Size Me” Spurlock’s new movie may have surreptitiously captured Osama Bin Laden on camera? Just consider the marketing potential if it were true.

Spurred by this tantalizing tidbit, the Buzz Brothers Weinstein snapped up the U.S. rights to distribute “Where in the World is Osama Bin Laden.” Good news for my friend Matt Frankel who just joined the motion picture company as its new head of communications. It’ll be partly up to him to see that the sighting secures a box-office bonanza of media play. From MSNBC.com:

“Whether this is just a genius publicity ploy or if Spurlock actually found bin Laden has yet to be revealed, but the answer should come next year, when the documentary is slated to premiere at the Sundance Film Festival.”

Separately, but not entirely unrelated, The New York Times’s Public Editor Clark Hoyt yesterday told the tale of the how one former White House PR man’s new book burst onto the buzzmeter.

Several weeks ago, Scott McClellan’s editor released an advance excerpt in which the deposed PR man/author supposedly confirmed that the Bushies directed him to lie about the illegal outing of CIA agent Valerie Plame. (This is news?) Apparently so…big time.

“Discussing the excerpt later, Peter Osnos, the founder of PublicAffairs Books, said, ‘As you do with every book, you need to get their attention.’ Boy, did he ever get it.”

I suspect that Mr. McClellan’s literary agent, when shopping the book, played fast and loose with this most newsworthy nugget in seeking to seal the deal. In the end, the book’s PR value trumped its literary value on its journey to the Amazon. Wouldn’t you agree, Judith?

Both cases seem to affirm that a project’s publicity potential (aka “mediability“), versus its artistic, cultural or historical attributes, nowadays are all that’s needed to garner the green light. “Will it play in Peoria” has given way to “can we publicize it in Peoria?”

Oh. One last example. I was watching the ubiquitous Jerry Seinfeld last night on one of the countless talk shows on which he’s appeared to promote his new movie. During the interview, he was asked how the movie came into bee-ing.

Mr. Seinfeld told the story of nervously sitting next to Steven Spielberg at a dinner party. When there was a lull in the conversation, Jerry, on a whim, casually suggested a “‘B Movie’ about bees.” (In other words…a movie about nothing.)

To hear Mr. Seinfeld tell it, Mr. Spielberg “got very excited” and immediately called the second leg of the Dreamworks troika, Mr. Katzenberg, who also got very excited. The movie apparently had no plot or not much else going for it, except for one element: Jerry Seinfeld. More specifically, it was too deceptively delicious to pass on this publicity-producing prospect.