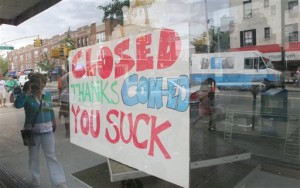 Last summer, Con Edison, New York City’s electric monopoly, had a big problem, that seemed to go on…and on….and on. It concerned a massive power failure in the NYC Borough of Queens affecting some 350,000 customers.

(For my two readers in Jakarta, don’t confuse Queens with New York’s other boroughs of The Bronx, Staten Island, Brooklyn or Manhattan. Think of it this way: Queens is home to the New York Mets, whereas The Bronx is home to the Yankees. Queens has LaGuardia Airport, Brooklyn and Kennedy.)

The blackout somehow lasted over a week’s time (during a nasty New York heat wave), allowing the local politicians to ingratiate themselves with their constituents at the expense of the big bad utility. With the power finally restored, Con Ed decided that it needed to mend the broken bridges since the news media filter pretty much filtered out Con Ed’s perspective.

The company smartly resorted to advertorials, the knd of which we witnessed recently from JetBlue, which also is headquartered in Queens. This brings us to the present. On Sunday, a popular day for politicos to posture for the press, one New York State Assemblyman from Queens, not wise to the ways of corporate reputation, castigated the utility for the “Blackout P.R. Overload.” Democrat Michael Gianaris, said:

“It’s the ultimate outrage . . . that they’re running a slick p.r. campaign . . . instead of helping businesses get up on their feet.”

Gee. Couldn’t this esteemed politician have chosen a different adjective to describe the campaign? A Con Ed spokeswoman replied:

“…the utility has spent about $90 million for its emergency response, permanent repairs and ‘ongoing improvements’ in the area since the blackout. She added that Con Ed paid out a total of $14.3 million in claims. And she defended the p.r. campaign, saying, ‘Advertising in local papers . . . is an important means of communicating our commitment…We have an ongoing commitment to communicate to our customers.'”

Right. And by the way, Mike, “advertising in newspapers” is not exactly PR, though most full-service PR firms offer clients the advertorial option. Ironically, it’s this Queens politician who’s actually using PR (and taxpayer dollars) for his own aggrandizement.