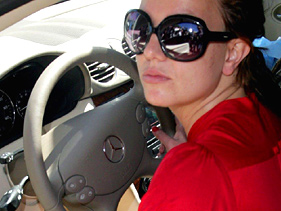 I really thought I would have to eat my own words. As life took a turn to the bizarre for one crazed and deposed pop star and mom, I went on the limb to predict that she may just end up proving them all wrong. From The Flack (9/17/07):

“Time, and a fickle public, have amazing healing powers. So, as I ponder the fate of one dazed and fallen pop star on the eve of her first album release in four years, I predict that Newton’s law (e.g., “every action…”) may just prevail. The media forces of nature will permit Ms. Spears to surprise all of today’s naysayers to rise again. Right, Mariah?”

Earlier this week, her “friends” were urging a boycott of her new album on the grounds that if no one bought it, the “tough love” might just scare the wits into her. But guess what? The early reviews are in. Here’s a snippet from The AP:

“‘Blackout,’ her first studio album in four years, is not only a very good album, itâ€™s her best work ever â€” a triumph, with not a bad song to be found on the 12 tracks.”

As PR people, we’re often asked, “what makes a story most?” We typically answer with “the biggest,” “most expensive,” “first” or whatever superlative we can reasonably conjure up. But the biggest stories tend to be those that defy conventional wisdom, e.g., the child prodigy, the cancer-survivor who went on to notch seven consecutive Tour de France victories, the waif model whose career rose to new heights after her front page cocaine bust, the Asian-African-American pro golf superstar, and the list goes on and on.

What’s weird is that at least Mariah appeared to get her personal act together for her triumphant return to the glaring spotlight. Ms. Spears, well, her life is still a train wreck. I’ll be curious to see how these seemingly contradictory forces play out as album promotion time nears. I wouldn’t bet on a two-parter with Matt Lauer, but “ET” or “Access,” well…whatever it takes.