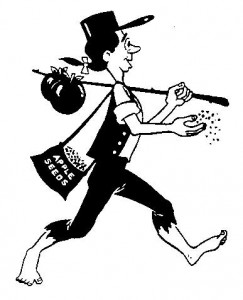 Edelman’s Derek Creevey must be working overtime. The PR man for the PR firm no doubt had a hand in Brian Steinberg’s recent WSJ profile of the firm’s namesake CEO. Today, we open (New York Post-wannabe) the New York Sun to find Richard waxing poetic on blogging strategy and of course, the success of his firm.

Of particular interest to me were his comments on blog-seeding (or blog relations). This is an area that’s caused some controversy for the firm (and industry), and one that merits greater attention since bloggers generally operate by a different rule set than traditional journalists. (Some say they have no rules.)

As PR pros, we often struggle with how best to engage a blogger, and why (and when) is it necessary to do so?

“Certain blogs are read by reporters in the mainstream media, and then they call the client to do a story, and that’s how publicity is obtained,” Mr. Edelman said.

(Is it not “publicity” until it reaches the mainstream media?)

While many in our professions are trying to cajole clients to embrace blogging (for better or worse), use social media networks, consider SEM/SEO, create and syndicate digital video, produce podcasts, and digitally optimize their news releases, etc., the issue of how best to efficiently “converse” with a blogger to influence (yes, influence) his or her output remains of paramount importance.

To its credit, Edelman as an agency was transparent about who it represented when contacting bloggers for Wal-Mart. Yet, the firm only reached out to those bloggers sympathetic to Wal-Mart’s point-of-view. Was this strategic or swarmy? In the end, according to Mr. Edelman, the effort

“…humanized the company and gave them the horizontal conversation: the peer-to-peer conversation, or word of mouth,” he said. “The ‘new thing’ in all forms of marketing is that companies must understand that the person consumers trust most are persons most like themselves. What we’re seeing is a devolution of authority.”

So there you have it.