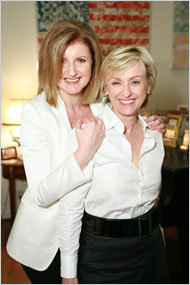 As a politically progressive person, I often spend my free time perusing the gamut of like-minded blogs, thought-leading news sites and one especially dominant microblog. In so doing, I’ve gained a better understanding of how news and views gain currency in today’s changed media ecosystem. (In PR, this is probably a very good thing to know.)

Traditional PR’ists have frequently looked to one of a handful of influential mainstream news organizations to jump start their client’s story. An exclusive in The New York Times, Wall Street Journal, or “The Daily Show” for that matter, still has an uncanny ability to kindle “the conversation” — both online and off.

With the advent of citizen journalism, many in our midst were smitten by the most catalytic blogs, i.e., those with the greatest capacity to set tongues a wagging. Other forward-thinking PR pros embraced the viral virtues of bypassing journalists altogether by search-optimizing and self-syndicating their media “assets” for direct discovery by end audiences — a direct-to-customer approach if you will.

In today’s new PR reality, none of these tactics are mutally exclusive. All merit consideration, likely in combination, for advancing a client’s communications and business objectives.

More recently, however, I’ve noticed that individual blogs or mainstream outlets rarely have the capacity to singularly drive a national conversation. Rather, I’ve seen a clustering effect among like-minded bloggers, many of whom know and are friendly with one another. Together, they have the capacity to concoct a most concentrated cup of Google juice than any one can alone.

Consider Arianna Huffington, a political potentate in and of herself. Ever notice the confluence of shared themes and links across Ms. Huffington’s friends at TPM, 23/6, Think Progress, Daily Kos and the Daily Beast? Well, she’s not alone. The same gang-like approach also applies to clusters on the right side of the political spectrum, not to mention those blog beats where social media is especially developed, e.g., technology, media and marketing.

These clusters are especially strong story amplifiers, but they also can be unnerving to those of us charged with minding the reputations of the objects of their disaffection. It’s much easier to quash a lone detractor through fact-based engagement than it is to silence a sour-noted chorus of kindred spirits who regularly scratch each others’ backs. Quick and nimble is now mandated to head off the echo chamber, as Sen. Obama’s Fight the Smears site demonstrates.

In a related story today, The Times’s Jacques Steinberg took a look at Media Matters, which monitors news and commentary for misinformation — mostly of the Republican variety — surfacing the most malicious and misleading propaganda of the day:

“…Media Matters has given the Democrats a weapon they have not had in previous campaigns: a rapid-fire, technologically sophisticated means to call out what it considers ‘conservative misinformation’ on air or in print, then feed it to a Rolodex of reporters, cable channels and bloggers hungry for grist…the team of researchers search for the kind of â€œgotchaâ€ moment that the organization might publicize.”

No longer can issues advocates rely on a single outlet to create that contagious conversation. Better to consider the clusters of influencers, and feed from there. Also, this cluster approach is not relegated solely to the blogosphere or MSM. One’s Twitter followers can serve as a potently aligned force for amplifying one’s POV.