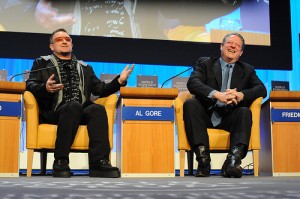 Tooling on Twitter this morning, I stumbled cross Robert Scoble’s inducement to follow his reportage from the World Economic Forum in Davos. Since his tweet was short and non-specific (aren’t all tweets?), I passed it by:

shelisrael @scobleizer Your qik stuff from Davos is ground breaking. I envy you this gig. 4 minutes ago from web in reply to Scobleizer

I was thus prompted to click on the link to Scoble’s hand-held video chat with pastor/author Rick Warren whose Purpose Driven Life is the “best-selling hard cover book of all time” (excluding The Bible I suppose). The interview was fun and informal, especially when Warren turned the tables to put Scoble in the spotlight.

It also was cool to see the esteemed former TIME editor, CNN honcho and current head of the Aspen Institute Walter Isaacson interrupt the chat to say hello to Warren during the interview. (Scoble asked Warren who he was.)

The admittedly rough, but instantly engaging and accessible video feed brought back memories of my amazement in seeing for the first time an AP photographer connect his camera to a pay phone and send his images via modem back to the wire service’s headquarters. (Dating myself, there was a day when we PR types hand-carried raw film to The AP Photo Desk and waited until the desk processed it. If we were fortunate to have our client’s image selected, we typed out the caption right there on the spot.)

It never ceases to astound me how new technologies have so quickly changed the way news/info is delivered and consumed. How cool was it to see TV news reporters in remote, war-torn locales outfitted with mobile satellite dishes to feed their reports? Today, wireless broadband, and the growing plethora of cool applications to capitalize on it, opens up media doors that few could have imagined even just a couple of years ago.

But back to Scoble’s vids from Davos. It didn’t matter to me that the video was sometimes jerky and out of focus. I found the content and immediacy of it all so grossly engaging. It certainly made for better viewing than Ann Curry’s packaged report on ABC News from the day Davos opened.

I also wondered what kind of cred one needed to get a cred (media credential, that is). Sure The Scobleizer has a big following through his many digital incarnations, but what about other “non-traditional” journalists. Did they too merit access to the movers & shakers moving and shaking in Switzerland? It’s clear the MSM-affiliated bloggers were repped in full force.