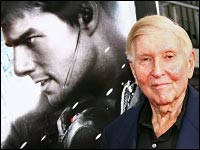 What else is there to be said about the PR-fueled feud between Sumner and Tom? Virtually every mainstream and online media outlet has offered its take on the salaciously see-saw story for which the Wall Street Journal can claim first dibs.

One different take on the he said-he said drama that has Hollywood and New York tongues a-wagging emerges in Red Herring’s analysis of the story’s near ubiquity. True to its heritage, the biz-tech glossy focused on the echo chamber effect of the blogosphere, and whether gossip blogs are good investments.

“The new economics of content also mean web sites will hash out Mr. Cruiseâ€™s situation endlessly…And where thereâ€™s popularity, money to fund such startups canâ€™t be far behind.”

“‘I probably would not fund a celebrity blog. I donâ€™t think itâ€™s a viable business model.’ He said that since gossip magazines depend on subscriptions and newsstand sales for revenues, he wouldnâ€™t want to back a site that was pure celebrity dish. ‘It seems a little fickle to meâ€”gossip mags are a good business but have their ups and downs,’ he said.”

Huffington’s fortunes notwithstanding, the real question for PR types is how the axiom “time heels” may only apply to mainstream outlets, whereas online, news of the voyeuristic variety tends to have a much longer half-life (not to mention a bigger online footprint).

This festering (eternal?) online presence may not bode well for those wishing for a quick escape from the harsh spotlight, but it could provide a boon to PR/SEO and SE de-O pros. (Better keep my day job.)