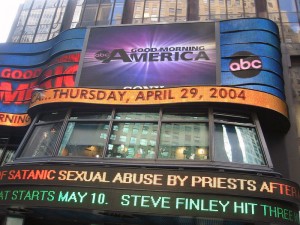 Years ago, when a story popped on a network morning show or evening newscast, invariably it had its origin in some daily newspaper somewhere. Any quick Factiva or Lexis-Nexis search could confirm that.

And we all know those longer-form psycho segments on ABC’s “20/20” or CBS’s “48 Hours,” featuring some Lothario with many wives, some murdered, almost all initially appeared in print.

Yesterday, the former standard bearer of the digital age advised “publicity-starved tech companies” to: forget TechCrunch and GigaOm. Try instead placing your client on a broadcast TV morning show to gain some buzz.

The Industry Standard, now resurrected in bits and bytes only, seemed to suddenly discover the power of the network morning shows — in this case, Diane Sawyer’s “Good Morning America.” In a post titled “Want publicity? Forget TechCrunch and get on Good Morning America,” Jordon Golson observes that a pop on “GMA” or “Today” can:

“put a product in front of millions of viewers who might not normally find it on the Web.”

Could the PR pendulum be swinging back to the mainstream media? Many will say that the pendulum never truly abandoned the MSM (though admittedly many viewers and readers have). In fact, those morning shows remain the holy grail even for the holiest of the digitally savvy agencies’ media specialists.

“…mainstream attention and appeal is needed to help a site truly thrive (for a site missing both of those, see: FriendFeed). That being said, getting noticed by a high-profile tech site is probably the first step on the way to landing a spot on the ‘Today Show.'”

So are newspapers a shadow of the broadcast TV catalysts they once were? I wonder.