I have been a long-time fan and somewhat regular attendee of the New York Tech Meetups where month after month ten entrepreneurs take the stage to showcase their tech-driven startups before a most discerning audience of coders, students, VCs, journalists, entrepreneurs, etc. Mostly missing from the mix, however, are PR professionals who would be charged with building awareness for and usage of the fantastical products and services being touted.

Over the years, I’ve witnessed hundreds of captivating app and product presentations, some of which landed funding and eventually morphed into real businesses.  Most did not. A great idea can only achieve greatness if people actually know about it.

Part of the role of the PR pro is to objectively assess the most compelling elements of the start-up, i.e., what problem is it solving, what cred do the principals have, how did it come to be, etc. Our goal is to formulate a compelling narrative that will capture the collective imaginations of journalists, VCs, and other influencers.

But what if the narrative is compelling, but the substance behind it leaves much to be desired? (In political terms, think Donald Trump.)

Consider the case of the attractive, articulate and poised Stanford University college student who, like Bill Gates and Mark Zuckerberg before her, dropped out to pursue a simple idea: how to make the decades-old process of giving and analyzing blood work quick, easy and dramatically less expensive.  Sounds great!

So great, in fact, that this founder of a company with a Greek-sounding, medical-like name was soon the subject of scores of fawning profiles in places like The New Yorker (“Blood, Simpler: One woman’s drive to upend medical testing”), on CNBC (“Fear of blood inspired youngest female billionaire“), and even in T: The New York Times Style Magazine (“Five Visionary Tech EntrepreneursWho Are Changing the World“).

The company soon became a unicorn — nine times over — and made this young college dropout, passionately armed with a compelling narrative and a dream, a billionaire, on paper.

That is until this week when the Wall Street Journal dropped the proverbial bombshell via an investigative piece titled “Hot Startup Theranos Has Struggled With Its Blood-Test Technology“. In it, the reporter wrote:

“In a complaint to regulators, one Theranos employee accused the company of failing to report test results that raised questions about the precision of the Edison system. Such a failure could be a violation of federal rules for laboratories, the former employee said.” 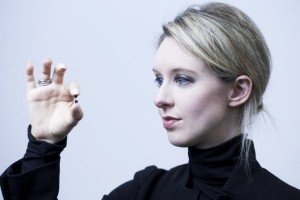 Now this may be a disgruntled worker holding a grudge, but a follow-up WSJ piece today reports that the startup is dialing back the primary message on which the company build its fame and fortune, i.e., one drop of blood versus vials can now do the trick:

“Under pressure from regulators, laboratory firm Theranos Inc. has stopped collecting tiny vials of blood drawn from finger pricks for all but one of its tests, according to a person familiar with the matter, backing away from a method the company has touted as it rose to become one of Silicon Valley’s hottest startups.”

New York Magazine’s headline pretty much captured the growing sentiment about this much ballyhooed, VC-fueled startup “Silicon Valley’s Most Inspiring Company May Be a Fraud.”

“The CEO speculated the reason why Theranos has garnered so much attention and scrutiny, stating ‘This is what happens when you work to change things, and first they think you’re crazy, then they fight you and then all of a sudden you change the world,’ Holmes said.

Holmes said she was personally shocked to see that The Journal would publish the article, as her company had purportedly sent the WSJ more than 1,000 pages of documentation that allegedly refuted the statements in the story.”

In fact, her company has retained iconic lawyer David Boies to defend its integrity. He told the WSJ that Theranos is not using the device for all its test, saying the transition is “a journey.”

Getting back to the New York Tech Meetup, I do remember one blood-related presentation by digital marketing maven and relatively new diabetic Jeff Dachis who built a crowd-driven app called One Drop “to bring the quantified self-movement, internet of things, big data, and mobile computing to people with diabetes in a simple, fully integrated solution.” If only Jeff had the billions in funding and VC/PR firepower Theranos had!

One last thought: all of my firm’s contracts with clients include a clause that will hold us harmless if we disseminate erroneous information provided to us by the client and it results in legal action. I wonder if Theranos’s PR reps are feeling a little vulnerable right about now? Will the VC’s hold them harmless?