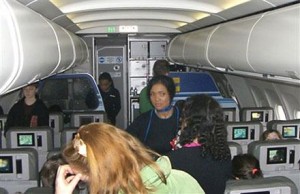 Who’s not following the problems wrought by the big Nor’easter that besieged the Middle Atlantic States this week, New York among them?

And who couldn’t help but notice how the CEO of the nation’s most esteemed airline (is esteemed and airline an oxymoron?) taped a mea culpa as part of last night’s lead story on (the newly #2-rated) “NBC Nightly News?”

Well and good, ‘cept that while Jet Blue’s David Neeleman sat in his office to tape an apology for stranding hundreds and hundreds of passengers, his airline’s issues were still unresolved. Two days after the storm, local NYC media carried reports from disgusted passengers who traveled to the airport last night (Thursday) — after JetBlue’s website indicated some modicum of normality — only to find their flights has been cancelled or delayed. David, did you really think that NBC News could solve the airline’s operational problems?

Calling Wednesdayâ€™s delays ‘unacceptable,’ the airline planned to offer the affected passengers refunds and free flights. ‘Itâ€™s going to certainly impact us, and itâ€™s going to be many millions of dollars that weâ€™re going to lose from this,’ JetBlue CEO David Neeleman told CNBC television. ‘I donâ€™t blame our customers for being upset with this,’ he added.

Nor do I. But you may have jumped the gun a bit in your declarations to the news media. I mean do you think Tim Hardaway can sweep away his problems with a simple apology?